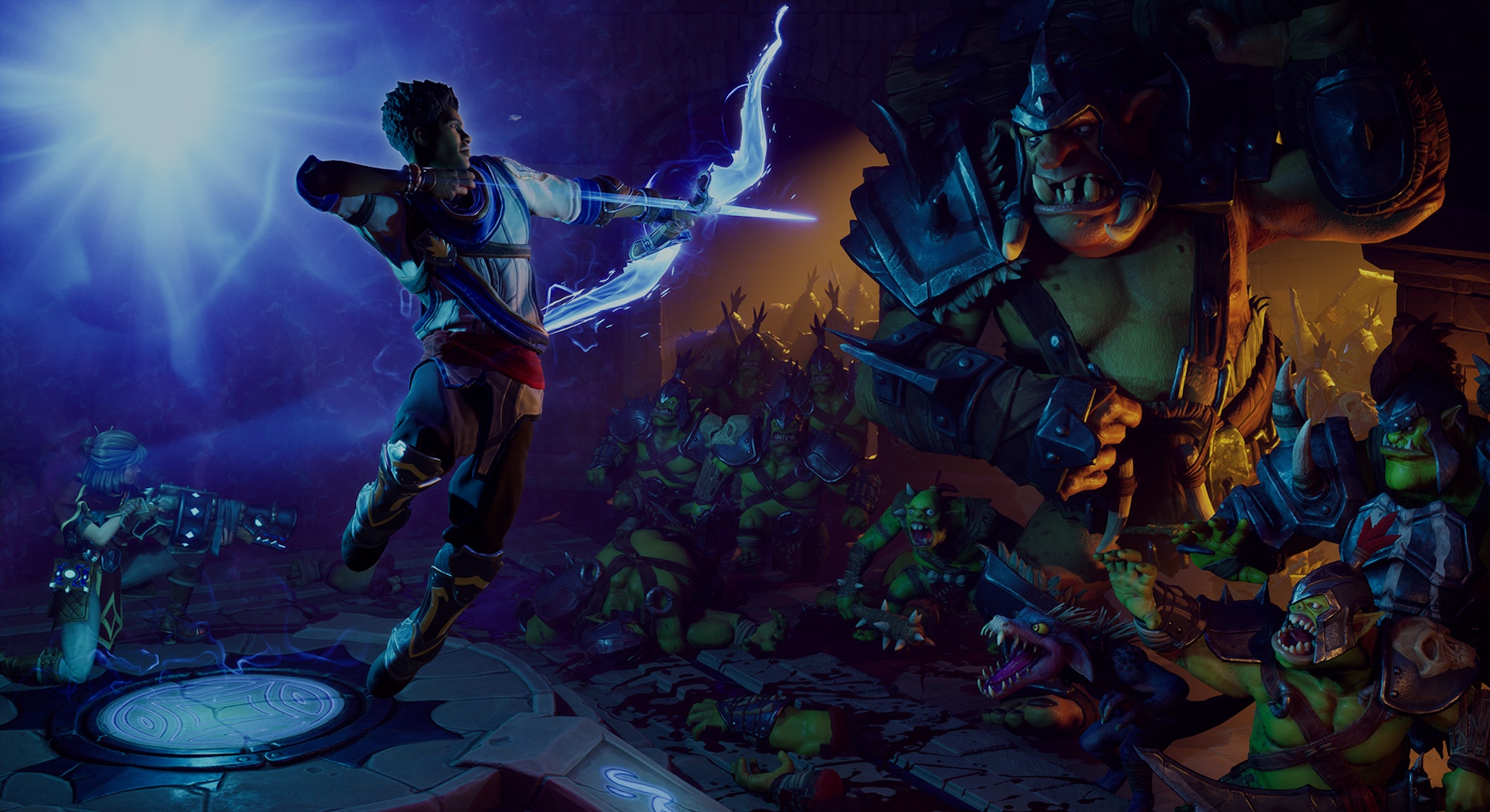 Orcs Must Die! 3 is the first Stadia exclusive to actually feel like it was made for the platform.

Orcs Must Die! Is an influential tower defense series where players build traps and other structures in order to fight off hordes of titular orcs, as a new villain with a connection to a classic Orcs Must Die! Unchained's Cygnus emerges. The third entry in the franchise takes things to new heights thanks to the unique processing power of Google Stadia.

Google’s fledgling cloud gaming platform has a lot of promising tech behind it that allows it to do things like stream large worlds without lag, show multiple screens at once without a hit to resolution, and save your game state so you can share it with others. Unfortunately, not many games take advantage of these features in impressive ways, even among Stadia exclusives. Orcs Must Die! 3 finally bucks that trend.

The game still has some rough edges, thanks to a weak story and missing content compared to its predecessor. Regardless, it takes advantage of the platform in its impressive War Scenarios, which makes it a must-buy game for anyone intrigued by Stadia’s potential, even if I wouldn’t call it a “killer app” just yet.

Return of the Horde

The core concept of Orcs Must Die! is reminiscent of Fortnite: Save the World, though the original Orcs Must Die! games launched almost six years before Fortnite. Sadly, the series hit a rough patch, and its future seemed grim after Orcs Must Die! Unchained was shut down.

Fortunately, Google saved the project and got Robot Entertainment to make the game for Stadia because they were fans of the franchise, according to a Reddit post from the developer’s CEO. From that story alone, you can tell that this is a title Google was more involved in, which plays into why the game is actually one of the few exclusives to show off Stadia’s unique strengths as a platform.

The gameplay loop of Orcs Must Die! 3 hasn’t changed much from previous games: build a series of traps, fend off hordes of invading orcs, use the points you gain to beef up your traps more, and rinse and repeat until you win. It’s a formula that works thanks to the puzzle-like mindset it puts players in as they figure out what Rube Goldberg-like series of traps is the best.

Google Stadia is able to improve it in one key way: make the hordes bigger and badder.

While many of the levels are smaller in scale, it’s still impressive to see hundreds of enemies, explosions, and other objects it can get on-screen without tanking the frame rate. This is best showcased in the War Scenarios, which increase the number of Orcs invading, add bosses, and even give players new large-scale traps like launchpads and catapults.

When a round begins and you see a massive horde of orcs rush in, it’s exhilarating. That tension is never broken due to poor performance. While Orcs Must Die! 3 will come to other platforms in the future, this is a feature I’m not sure current-gen hardware like PS4, Switch, or Xbox One could handle without reworks. Inverse asked Robot Entertainment about what will carry over to other versions of the game, but we did not hear back before publication.

These hordes can feel undefeatable on higher difficulties, but if you find the right combination of traps, anything is possible. One particularly good combo I found had me using checkerboarded tar and brimstone tiles to slow down and burn enemies over time while I used a catapult to launch destructive projectiles from afar.

It’s a clear step up from what I’ve seen from previous Orcs Must Die! games, and clever use of Stadia’s added power. This needs to be the M.O. for Stadia exclusives going forward: take advantage of the platform in unique and obvious ways that you can only get via cloud gaming.

The horde's numbers are thinned

While Orcs Must Die! 3 is an enjoyable tower defense game with thoughtful level design and impressive hordes, it still suffers from a budget feel. The cutscenes are nicely animated in a Dreamworks style, but they don’t last long and feature pretty poor voice acting. You can mostly ignore the story elements though, especially if you just plan on skipping it to play the campaign or Endless mode ad nauseam.

Unfortunately, you’ll still run into some other problems if you do that. Glitches with the AI occasionally pop up in large hordes where enemies would get stuck in place. Multiplayer also had quite a few glitches like archers not firing their arrows, and a weird UI colorization glitch you can see below. While these rough edges are understandable as the game’s QA phase was during the work from home period, these are issues the devs need to patch out.

And while Robot Entertainment is at it, some more levels or modes would be great too. Endless mode surprisingly lacks War Scenarios, and the weekly challenges that kept players returning to the game are MIA at launch. With only 18 levels, I can see players burning through Orc Must Die! 3 fairly quickly and burning out on it if these things aren’t added soon.

Gylt, Spitlings, Lost Words, and Wave Break are all enjoyable indie games, but none of them feel like they needed to be on Stadia. The only games to really take advantage of the platform thus far are Ghost Recon Breakpoint and Crayta. This is finally starting to change though, with Crayta showing off State Share and now Orcs Must Die! 3 featuring massive hordes of enemies without any slowdown.

Stadia and Robot Entertainment have a fantastic base here that really takes advantage of the platform, those glitches need to be fixed and the live service type elements need to follow through for Orcs Must Die! 3 to reach killer app status on Google Stadia. Even with its rough edges, this is a very important game for the platform and sets a standard Stadia Games and Entertainment needs to follow with its exclusives going forward. 8/10

INVERSE VIDEO GAME REVIEW ETHOS: When it comes to video games, Inverse values a few qualities that other sites may not. For instance, we care about hours over money. Many new AAA games have similar costs, which is why we value the experience of playing more than price comparisons. We don’t value grinding and fetch quests as much as games that make the most out of every level. We also care about the in-game narrative more than most. If the world of a video game is rich enough to foster sociological theories about its government and character backstories, it’s a game we won’t be able to stop thinking about, no matter its price or popularity. We won’t punch down. We won’t evaluate an indie game in the same way we will evaluate a AAA game that’s produced by a team of thousands. We review games based on what’s available in our consoles at the time. For instance, we won’t hold it against a video game if its online mode isn’t perfect at launch. And finally, we have very little tolerance for junk science. (Magic is always OK.) Here’s how we would have reviewed some classic games: 10 = GoldenEye 007. 9 = Red Dead Redemption 2. 8 = Celeste. 7 = Mass Effect 3. 6 = No Man’s Sky. 5 = Fortnite. 4 = Anthem. 3 = Star Wars Battlefront II. 2 = Assassin’s Creed Unity. 1 = E.T. the Extra-Terrestrial.