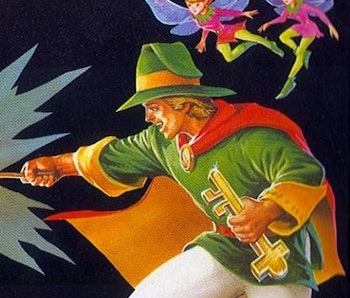 One fascinating aspect of games in the NES and SNES era is how they can throw wildly varying concepts together, letting the player figure out how they all mesh. Starfox is a great example: What if ancient Japanese folk gods suddenly became starship fighters? The 1986 Tecmo game Solomon’s Key is another: It combines elements as far-ranging as Dungeons & Dragons, the Bible, and the fundamental works of Taoism to create a fascinating and very difficult puzzle game.

Sadly, the game’s rich backstory is lost through using the app alone. Older games were made with the thinking that a player, upon returning home from the store, would read their manual. In-game tutorials now make up most of the learning process in games, but the manuals would sometimes fill up their pages with fascinating lore, a sense of the game’s style, as well as any other oddities the developers wanted to throw in.

Not all of them are that interesting, but in the case of Solomon’s Key, the manual greatly expands the concepts of the game. To quote from the game’s manual:

“Long, long ago the world was in a state of chaos, where demons caused evil & tormented all. That changed when Solomon, a great king & magician, invented a magical formula which he wrote inside a secret book called "Solomon's Key." This book arrested and sealed away all evil demons into a constellation sign which was hidden. "Solomon's Key" restored light and peace to the world. Upon hearing this legend, a taoist monk searched for a long period of time to find "Solomon's Key." After locating the constellation sign, he discovers the "Key." Once in his grasp many dreadful demons were freed from the magical power of this book. The world was brought back to chaos and darkness. Everything on Earth was now under control by the demons just like the pre-creation days. King Yutra from the fairyland called "Lyrac," ordered the wizard Dana to restore order back to the world. Dana accepted this mission and stepped into the forbidden land of the "Constellation Sign."

There’s a lot going on here: demons, an inference to the Biblical King Solomon (who no less than Satanist Aleister Crowley said had magic keys), a reference to the religion of Taoism (which focuses on a cosmic force known as the Tao that flows through all things), constellations, fairylands, forbidden lands, and some wizard guy named Dana, who appears in a snazzy Robin Hood-style cloak on the cover.

Hearing all this, it is perhaps not a shock to learn that Solomon’s Key was initially meant to be an action game. In an interview on Kotaku, main designer Michitaka Tsuruta said that turnover at Tecmo put him in charge of the game. “I guess that’s why it became a different kind of game,” he said.

Basic gameplay in Solomon’s Key centers around Dana, who appears in one part of a room, trying to attain a key in another part of the room and get to a door in yet another part of the room. Enemies fill the room and move around, sometimes destroying themselves. The rooms are divided up by blocks, some of which are breakable and some of which are not.

Dana has some limited abilities of his own: He can create and break the breakable boxes. He can shoot out holy fireballs to destroy the demons and monsters that haunt him. He can access some magical powers, including the “scroll of a great Taoist” that allows him to have an extra fireball.

These are relatively simple elements. But as one continues to play Solomon’s Key, it’s easy to see how they grow more and more confounding with each level. Destroy the monsters here, create a box there, oh wait the monsters broke, create another box, and so on. All of the levels are timed, which adds a sense of rush to strategy formation.

Solomon’s Key requires players to learn patterns and shape them to their own benefit. It’s a fun challenge. The puzzle is laid out right in front of you, but figuring out an answer takes a cycle of learning, failure, learning, and failure again. If you’re looking for a new (or old) puzzle obsession, look no further.