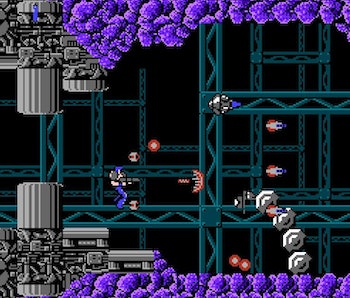 These days, Natsume is perhaps best known for its wholesome farming simulator Harvest Moon, filled with delicious strawberry cake. But that just goes to show how trends in the video game industry can change drastically: back in 1990, under a very different corporate structure, Natsume released a very different kind of game: S.C.A.T.: Special Cybernetic Attack Team.

Perhaps best known for its remarkably poor acronym, S.C.A.T is a lot of fun. But unlike Harvest Moon, it is not a game best suited for relaxing or planning out your next crops. Rather, it is a blink-and-you’re-dead side-view shoot-'em-up that will give an adrenaline rush with every quick dodge and destroyed robot.

S.C.A.T. is not what one would call a “plot-heavy” game. Aliens are invading the Earth, the player is told, and you have to destroy them. With playable characters named Arnold and Sigourney, the game wears its Terminator and Alien influences on its sleeve. S.C.A.T. does not offer the tremendous creativity of either of those franchises—or, say, a game that would come out four years later, Super Metroid.

The game’s science fiction elements mainly consist of robots flying at the player from all sides as they attempt to use their jetpack and two droids to send off attack after attack. The playstyle here is so frenetic, so energetic, that it brought to mind a game that incorporates its style among many: 2017’s Nier: Automata. When that modern classic enters its shoot-’em-up mode, one has to wonder if S.C.A.T was among its many influences.

Also immediately, the game throws you into a world of figuring out trajectories of energy blasts and learning the rapid-fire timing of certain robots. No one enemy in the game is particularly challenging: small flying robots scatter slow-moving energy blasts, turrets that are triggered into shooting faster energy beams, the occasional alien troop, stretching security bots that will break into flying blocks.

The challenge is that they are all coming at you at the same time, the screen pushing you up, down, or forward. A little like driving fast on a freeway, the player is constantly scanning the surroundings for incoming dangers, dangers that might become a problem in a few seconds (an eternity in S.C.A.T), and any obstacles Arnold and Sigourney might run into.

S.C.A.T. throws the player a few bones, like a health bar and the ability to change weapons with power-ups. But that health bar will likely be torn to shreds within a few minutes, making the struggle for survival an exciting one. The power-ups don’t radically change gameplay either, as a flurry of assaults from a laser works about as well as a blaster. The orb droids are the game’s most helpful addition, offering the chance for a few angled shots of your own.

There are places S.C.A.T lacks as a game—it lacks the creativity of rapid-fire games like Wild Guns— but it offers the pure dose of classic NES gameplay. It requires the rush of a trigger-happy player to be successful, but going through levels again and again works very well. S.C.A.T has strong replayability, working one’s way through an impossible level and having it feel slightly more possible with each go through is a testament to its creators at Natsume.

When things just start to click, and suddenly you’re passing through the barrage of attacks that you couldn’t before, because you’ve realized that you need to just move slightly more upwards than left—it’s a classic video game feeling, and S.C.A.T brings you there.