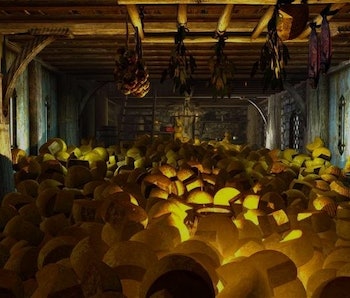 There’s an argument to be made that Final Fantasy XV revolutionized the role of video game food. Its realistic rendering of creatively crafted dishes was one thing, but they also found a way to flawlessly combine it into both the story and the game mechanics. But while FFXV may have improved on polygonal dining, food has always had a relatively silent, yet large role in gaming. Food regularly plays a role in world-building, character progression, and sometimes even meme generation. Let’s take a stroll down memory lane, remembering some of gaming’s finest dining.

In Portal, the cake is a pointless, unattainable goal you’re working towards, although you don’t discover that until you’ve already completed a number of sadistic tests. You discover that former scientists are driven mad by GLaDOS’ instructions, scrawling “The cake is a lie” over and over on the sterile white walls of Aperture Labs. At this point the cake is a tired, old joke, but at the time it was fun seeing a video game reference work its way so deeply into the pop culture lexicon.

The Tri-Island area’s most popular pirate libation, grog also happens to be highly corrosive and not terribly good for you. In fact, if you don’t drink it quickly enough, the glass holding it will eventually dissolve. The drink appears time and time again in the ageless Monkey Island series.

Skyrim was often heralded as the game of endless possibilities. Those possibilities included turning the game’s dragons into Thomas the Tank Engines or a cascade of cheese wheels so large it would push your PC to its limits. When one thinks of Skryim, it’s hard not to also think of those little yellow discs rolling down Skyrim’s majestic mountains in the thousands. Maybe that’s just me.

1-UP Mushrooms (Every Mario Ever)

What else is there to say? This little green mushroom is the video game power-up (and also a very important food source for Mario and friends). Using the term “1-UP” to signify an extra life was first used in Super Mario Bros., and it popularized it in video game vocabulary forever.

Before Stardew Valley there was Harvest Moon, and while the 2016 hit improved the farming sim in many ways, people had been cooking up tasty treats in an attempt to woo their favorite townsperson in Harvest Moon for years. The Strawberry Cake shows up throughout Harvest Moon’s lengthy history.

Food always played a central role in The Sims, and the games contain dozens of recipes. We had to choose the Turkey Dinner, as it was once one of the most difficult meals to master, and was integral for impressing guests (a sure-fire way to get your kid into private school) or a date.

Elixir Soup (The Legend of Zelda: The Wind Waker)

This consumable has a bit of sentiment attached to it. You only get access to this powerful healing item after you save Link’s ill grandmother from a terrible disease. She then offers up this god-send of a soup in thanks. Grandma was quite the chef, it turns out.

The Sandvich sure looks tasty for a sandwich made out of scrap metal. This is the first consumable available to the Heavy in Team Fortress 2, and it’s a nod to the character’s Russian accent.

Perhaps the most confusing aspect of Kingdom Hearts 2 was the Sea Salt Ice Cream. Is it a salt lick? A salt-flavored popsicle? Actual ice cream? It’s nearly as inscrutable as Kingdom Hearts’s current storyline, but they somehow made it look so, so tasty in the game. It continues to crop up in Kingdom Hearts spin-offs just to tease us.

Undertale found ways to move us while flipping a host of video game tropes on their heads. Lost in a strange land, your only real guiding light is Toriel, who eventually leads you back to your home where you get the chance to taste this comforting consumable for the first time.

Nuka-Cola, an obvious spoof of the Coca-Cola beverage empire, is almost synonymous with the Fallout series. It’s so plentiful that Nuka-Cola lives on two hundred years after the apocalypse, albeit in a slightly irradiated form. That didn’t stop us from chugging bottle after bottle of the stuff.

More like this
Gaming
Sep. 14, 2022
21 years ago, a Nintendo flop changed the video games industry forever
By Steven Asarch
Gaming
21 hours ago
GTA 6 leak could have a surprisingly positive impact on the industry
By Willa Rowe
Gaming
Sep. 22, 2022
Splatoon 3 is the glorious pinnacle of Nintendo's style agenda
By Jon Irwin
Related Tags
Share: