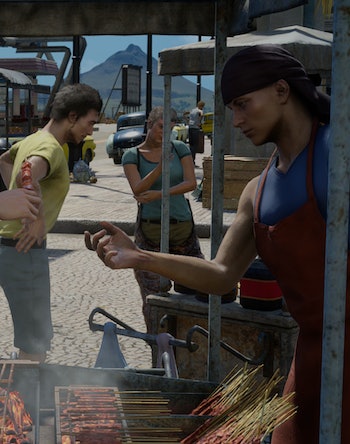 Final Fantasy XV just clicks in a way that the franchise really hasn’t been able to accomplish since Tidus was a stranger in the foreign land of Spira, laughing his sun-stained, bleached head right off. Rather than focusing exclusively on an overblown, overly dramatic story at the expense of any legit interesting characters (see: XI thru XIV), Final Fantasy XV instead opts to do both, offering a rich story with characters that we genuinely care about. Believe it or not, a big part of how Square Enix was able to pull off the best Final Fantasy in years was by honing in on the details — and one of the best examples of this is in the robust, rich, and downright delicious food.

Much of your time spent early on involves deciphering unexplained gameplay mechanics that are kind of a total mess — especially if you skip the necessary tutorial — but over time the nuances of Final Fantasy XV grow on you. And the thing is, you can’t really succeed at life in Eos without careful dieting and engaging in the painstaking pursuit of high-quality cooking ingredients. You know, it’s just like real life.

Each of the four primary characters has his more mundane interest outside of killing angry rhinos, slaughtering herds of sheep, and saving the entire kingdom from an invading army. Noctis likes to fish, Prompto shoots both pistol and camera, Gladiolus does sit-ups and survivalist training or something, and Ignis — easily the most cultured of the group — really fucking loves cooking. He’s an outright foodie, and a veritable food nerd. He’s got a notebook that he uses to steal recipes from restaurants (even poor, run-down diners) and especially from street vendors like the one featured above. You can also hunt down exclusive recipes or rare ingredients to help your bro expand his culinary empire.

In addition to making camp to level up your characters and save your game, you also get to have Ignis prepare a meal for your group each and every time. Each recipe will grant your party some kind of stat buff for a limited amount of time, like a boost to HP or Defense or both. These boosts can mean the difference between victory or defeat, especially during big boss battles or exotic hunts. Individual party members even have their favorites, and finding newer, better ingredients for said favorites provide special boosts to them specifically.

Rather than a mundane nuisance, the cooking and eating experience becomes purely joyous, especially when dishes look as good as some of these:

Kenny’s Salmon, for example, can be found at one of the earliest restaurants in the game, and is totally worth it.

And this chili “with meat” looks as good as the real thing, doesn’t it?

What you need to do to optimize your culinary experience in Final Fantasy XV is to collect every ingredient you can — on the map ingredient spots are marked by a little wheat symbol, fish that Noctis catch are also options, and many vendors will also sell you specific items — and even more important for you to do is to buy recipe books and try every new dish you come across at any and all diners, street vendors, and restaurants. This will open up a whole new food-based world for you as you build up your recipe collection and gain more flexibility as to what stat boosts you want to utilize moving forward.

They say the devil is in the details, but in Final Fantasy XV, it’s the tiny character moments and attention to detail that make the game really come alive. I was startled at some point when Gladiolus sneezed as we ran about across the fields of Eos.

I was even more surprised when Ignis pulled me aside after my party made camp and asked if I could help him prepare breakfast in the morning. Sure, I could have blown him off and reminded him that he was getting paid by my kingdom to babysit me, but we’re bros, so I said yes. The next morning, we chatted as I stirred a stew, struggling only lightly at the bit of multitasking. This quiet moment of bonding with my companion really made the experience feel special. Sure, it’s a game with high stakes where you have to save an entire kingdom from a rival nation and claim your birthright — including a ring and a throne — but Final Fantasy XV is also an intimate look into how to nurture friendship through mutual love of delicious-looking and -tasting food.