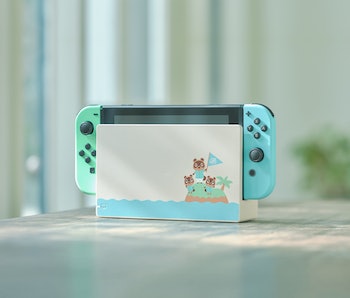 Nintendo is the undisputed champion of video-game cuteness. Even going back to the 8-bit days with R.O.B. the Robot and the Power Glove, the Osaka-based electronic entertainment titan has a proven knack for eye-grabbing designs that you just want to touch, even if you don't know your Mario from your Master Chief.

If you're one of the many folks looking to pick up a spiffy new gaming console this holiday season, consider skipping the wild goose chase to track down a new Xbox or PlayStation, and instead grab the cutest Nintendo Switch money can buy.

The Nintendo Switch is compact, but unless you've got a particularly zingy set of Joy-Con controllers, it's not exactly the most winsome bit of electronics around. With its white, blue, and green color palette, the special-edition Animal Crossing Switch is so easy on the eyes, you won't want to stuff it in a cupboard with your other fugly black boxes. Featuring a charming illustration of Animal Crossing's own titans of commerce — Tom, Timmie, and Tommie Nook — this is a display piece for the nerds who like to show off.

Since its 2017 launch, the Switch has accumulated a formidable library of first-party games, indie gems, and a host of retro favorites. In addition to the hugely popular island-life sim Animal Crossing: New Horizons, there are immersive fantasy gems like Legend of Zelda: Breath of the Wild and Fire Emblem: Three Houses, both discounted to $30 at Walmart for Black Friday. There's a robust library of old-school SNES and NES hits for Switch Online subscribers, and massive third-party franchises like Minecraft, Fortnite, and Overwatch. If you're looking for wholesome family fun, look no further than Mario Kart 8 or Super Mario Party.

Even those who already own a Switch might find the Animal Crossing edition an incremental upgrade — it benefits from a decent battery-life boost over the first-run units of the console, with 4.5 to 9 hours of juice for a full charge compared to a measly 2.5 to 6.5 hours for the earliest versions of the hardware.

What's not so great about the Nintendo Switch Animal Crossing Edition

While the Switch's solid library of great games and accessible price are enormously appealing, there's one pretty compelling reason to wait if you haven't already jumped on the Nintendo bandwagon. While Nintendo hasn't made any announcements, credible rumors of an enhanced Switch Pro console have been making the rounds since 2019, and there's reason to suspect we could see that mid-cycle upgrade released as soon as May 2021, along with the (assumed, but unofficial) release of the sequel to Breath of the Wild.

If you or the person on your gift list already has a Switch, $299 might seem a bit steep for redundant gaming tech. But the cuteness of the Animal Crossing Switch defies reason. I have both a Switch and a Switch Lite, and I still want this thing. Desperately.

You might not buy the Animal Crossing Nintendo Switch for yourself, but you'd sure love to have one. It's the kind of present that'll give you a little twinge of regret when you hand over that festively wrapped box, which is the surest sign of a darn good gift.

More like this
Gaming
6.28.2022 6:22 PM
10 intriguing Switch game reveals from the Nintendo Direct Mini
By Robin Bea
Gaming
7.3.2022 4:00 PM
You need to play Sega's most underrated platformer on Nintendo Switch ASAP
By David Grossman
Gaming
4 hours ago
Everything we know about the Splatoon 3 OLED Switch in 10 gooey images
By Joseph Yaden
Related Tags
Share: