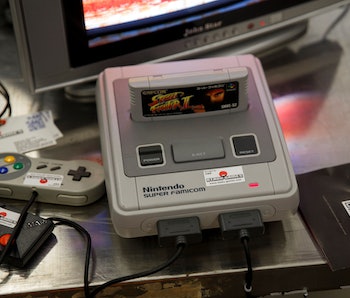 1995 saw a sea change in video game consoles, both in what they looked like and the type of games they played. The fifth generation of consoles was launching in North America, including the original Sony Playstation and the Sega Saturn. Nintendo was preparing for the future with the coming Nintendo 64 and shedding the past with its discontinuation of the original NES system. That left the Super Nintendo in an awkward place—on one hand, developers were making games as good as ever for a system they knew well. On the other, who wanted to play yesterday’s system?

If the Super Nintendo had truly become yesterday’s system, a game exploring the craziest possible version of history would be a perfect fit. And Wild Guns, a mostly forgotten shooting gallery game, fits the bill.

If you're a paid Nintendo Switch Online subscriber, you can play Wild Guns right now for free by downloading the Super Nintendo Entertainment System app.

Like many Super Nintendo games, Wild Guns was made in a hurry. Looking back in a 2013 interview, creator Shunichi Taniguchi said his boss at Natsume, his Tokyo-based games developer, “told us to develop a new game with two conditions: quickly and cheaply.” The game was made in five months with a team of three, but is bursting with creativity.

Inspired by the late-70s to mid-80s space adventure manga Cobra and spaghetti westerns like The Good, The Bad, and The Ugly, Wild Guns features two lead characters, Clint and Annie. The original instruction manual covers the game’s plot, where Annie’s family is seeking revenge on the Kid family and Clint is her hired space bounty hunter.

There’s no substantive difference between the two, besides some differing animations (Clint brings out a lever for bombs while Annie throws hers in the air), but I found playing with Annie gratifying. Beyond a few characters like Samus of Super Metroid and Terra Branford of Final Fantasy III, there aren’t many female main characters in SNES games. While the game itself doesn’t offer much in the way of plot or dialogue, seeing her blast her way through the unending waves is gratifying.

Despite its title, shooting is only one aspect of Wild Guns. I spent my first several attempts focusing on my guns, but I was dying quickly again and again, my screen fading into an old-timey grey. The aim of Wild Guns isn’t to kill most of the enemies, but to survive them. Once I began jumping and double-jumping around the screen, dodging their bullet targets and heeding Annie’s calls to “Look out!,” I started living a little longer, although frequent use of the Switch Online’s rewind button still came in handy.

It was worth it, though, because the enemies of Wild Guns are something to behold. They start off as standard cowboys and robotic destruction cabinets, but they grow increasingly random. There’s a distinctively non-Western guy with a knife trying to stab you. There’s a man wearing leopard print who hula-hoops on a moving robo-train, and the hula hoop shoots circular freezing blasts that make your character vulnerable to attacks.

What are these people doing in a space Western? It’s hard to say, but the genuine surprise I felt seeing them, and then the sudden rush of having to dodge their attacks, was a real rollercoaster of emotion.

Looking back, Taniguchi says that the Wild Guns team “still thought it was the golden age” of the Super Nintendo, not really concerned with what was quickly coming down the pike. At its best, the Wild Guns screen is a series of constant explosions, from dynamite to robots, and it’s hard to predict where it will go next. But it makes you want to find out.