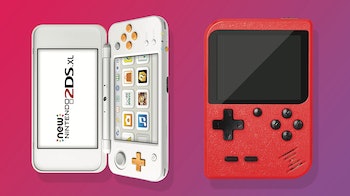 Nintendo’s Switch console revolutionized the market when it was first released in 2017, but even today, both limited supply and the high price tag can make it hard to get your hands on one. The best Nintendo Switch alternatives allow for portable play, have a long battery life, and are compatible with hundreds of games.

The first thing to consider when shopping around for a Switch alternative is what type of games you’re looking to play. Certain titles are only available on corresponding devices (such as flagship Pokémon games with Nintendo devices), so if you’re set on playing a specific game, it may limit the scope of your options. Some consoles may also have backwards compatibility, so you can use older cartridges with the newer device to replay your old favorites.

Another feature that’s integral to any gaming system purchase is storage. Some portable consoles have internal storage you can use to download games and additional apps, while others exclusively rely on cartridges or discs to run games. You can typically expand a device’s internal storage with a microSD card, but devices that require physical games can mean that your collection will take up more space in your home.

If you’ll be using your Switch alternative for portable play, the maximum resolution and size of the screen will significantly affect your gameplay. A console's resolution determines how crisp or pixelated its images are, and a larger screen can help reduce eye strain from holding the device right in front of you. While most portable gaming systems won’t be able to produce very high resolution, you could go with a tablet instead to have access to tons of mobile games while allowing for up to 4K resolution (even the Switch can’t do that yet).

With all that in mind, here are the top four picks for Switch alternatives you can buy right now.

1. A handheld that works with current Nintendo games

If you’re itching to play Switch games but can’t get your hands on a classic Nintendo Switch, then the Nintendo Switch Lite is the console for you. It’s compatible with nearly all of the hundreds of games available on the Switch except for those that rely on motion controls or Joy-Con rumble. Still, there are plenty of titles to choose from that will give you countless hours of gameplay, including classics like The Legend of Zelda: Breath of the Wild, Mario Kart 8 Deluxe, and Animal Crossing: New Horizons. You also get access to more than 90 classic arcade games and online play if you sign up for a Nintendo Switch Online membership. Since the Switch Lite is still part of Nintendo’s current line of devices, you’ll be able to play upcoming Switch games once they’re released.

This console comes with 32 GB of internal storage, which will quickly fill up if you purchase digital copies of your games, so you may also want to invest in a microSD card for extra storage.

One reviewer wrote: “This feels sooo much better in the hands than the bulkier original Switch, that I can't go back. Even though it's lighter, it feels more solid as the joycons do not come off, and it doesn't bend like the old one did. My arms don't get tired at all holding this. AND it had an actual D-pad! I also do not notice the smaller screen when playing, at all. It's just a much more pleasant handheld experience.”

2. A tablet with access to hundreds of indie and mobile games

An iPad might seem like a surprising choice for a gaming console, but Apple’s iPad Mini is a powerful gaming machine in disguise as a portable tablet. There are hundreds of engaging and fun mobile games you can play on an iPad, including popular titles like Among Us, Hearthstone, and Alto’s Odyssey. If you use apps like Discord to communicate with friends or teammates during games, you can also use the iPad to run both programs simultaneously instead of having to connect your headset to two devices.

The large high-resolution display produces crisp and bright graphics, and the lightning-fast Apple A12 Bionic chip can handle running quick online games and multiple apps without slowing down or crashing. When you’re not playing games, the iPad mini is great for reading books, streaming movies and shows, and checking your email.

One reviewer wrote: “Super great for gaming. I am so happy with this product. At first I thought it was too expensive and that I could find a different alternative but this is totally worth the money! I can play all my games with the best graphics and max frame!”

This small hand-held gaming device is perfect for someone who wants an offline console to play retro games like Super Mario and Galala. It comes pre-loaded with over 500 games that you can play on it, or you can plug the included A/V cable into your TV to display the games on a larger screen. There’s also a second controller that you can connect for two-player games, and the rechargeable battery will last for up to six hours of continuous play.

One reviewer wrote: “This has been a blast for our family during these days of quarantine. I have enjoyed the throwback games to show my kids and challenge them. This has been so much fun playing and reminiscing about my younger days. It's small, and light which will be get for traveling and easy hook up for when you're in the camper, Airbnb, or hotel. The graphics are good and lots of options for games to play.”

If you want access to Nintendo’s expansive library of DS games, the Nintendo 2DS XL is a great option. The DS line was officially discontinued by Nintendo in 2020, so you won’t be able to play new titles that get released, but there are still plenty of timeless DS games that have long-lasting playability. For those itching to play the Nintendo titles of their youth, the 2DS XL is backwards-compatible with the expansive library of DS titles, and you can still download older games like Street Fighter II, Super Mario Bros., and Pokémon Gold & Silver on Nintendo’s virtual console. This version of the 2DS XL comes pre-loaded with a copy of Mario Kart 7, so you can begin playing right out of the box. Like with the Switch consoles, you can use the NFC point to connect amiibos, small figurines or cards that you can tap on the device to add in-game extras or characters.

One reviewer wrote: “The best handheld money can buy outside of the switch. Battery life is sub 7 hours of constant use, the graphics are on par with the other 3ds. The build quality reminds me of a tank, perfect.”