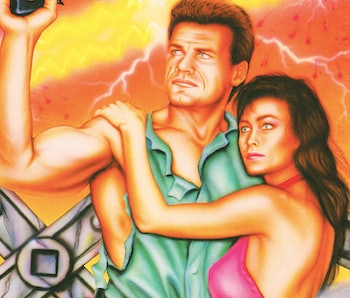 No matter the art form, imitation is the highest form of compliment. From blues musicians covering each other’s songs relentlessly or James Bond movies starting a spy trend, copying another person’s style is proof of the original’s success. So when I say that Vice: Project Doom, the 1991 NES game, is more or less a clone of Ninja Gaiden, it is meant as a compliment.

Ninja Gaiden, which was released in 1989 in North America, offered a revolution to gameplayers with a complex storyline enriching its familiar side-scrolling gameplay. Vice: Project Doom is very similar in everything from the cutscenes to the action. While the game will not win prizes in originality, the gameplay in Vice: Project Doom expands on those foundations and offers enough of a challenge to make it worth your while.

The game’s set-up is a fun mishmash of tropes centering around an evil corporation and the renegade cop hell-bent on taking them down. Operation Doom’s game manual describes an alien species coming to Earth and creating a green gel which they need to survive on the planet. Eventually, these aliens turn into the BEDA Corporation, which creates advanced technologies and is also “responsible for the maintenance of the alien race.”

Humans, including “some of the world’s wealthiest abusers,” seek out the gel to use themselves, even though it apparently kills people. Into this picture comes vice officer Quinn Hart, whose partner has already been killed in an investigation into the gel.

There are some NES games with incredible plots (like Nightshade), there are others that forgo plot in favor of characters (like Eliminator Boat Duel) and then there are games like Vice: Project Doom, which seek to replicate and double-down on ‘80s action movie tropes.

There are a few things that don't quite make sense in this plot, but when the game’s cutscenes offer cool guys in sunglasses next to explosions, it really doesn’t matter. Plots on many NES games can feel rushed and underdeveloped due to small teams and tight deadlines. While there are clearly undercooked aspects of Project Doom’s plot, it has an earnest charm to it. Like Operation Logic Bomb, there’s enough oddness here to keep you progressing from level to level.

Vice starts off with a racing level, eager to set itself apart. These racing aspects resemble earlier arcade games that might have been familiar to players at the time, like the 1987 NES port of the arcade game Spy Hunter. The driving is extremely fast-paced, with enemies flying all around and a health meter in the lower right-hand corner. You can switch gears for speed, and the entire thing is a fun whirlwind.

After that the game puts Quinn in a side-scroller, moving around different levels in the BEDA Corporation. One frustrating aspect of the Switch’s NES app emerges here: there are no real ways to learn the controls, save through in-game trial and error. While it doesn’t take that long to figure out that one needs to hit the Select button to change between the game’s three weapons, there should be a place to learn that outside of the game.

Of the three weapons —sword, gun, and bomb— I found myself using the close-up sword most. The latter two are ranged weapons, and the limited nature of the screen plus the frenzied pace of Project Doom’s enemies made aiming them a challenge.

And oh, those enemies. That green gel must be doing a number on humans, because there are punks with spiky mohawks crawling around on all fours, people (or aliens?) in wizard cloaks pogoing up and down, more wizard cloaks throwing fireballs at you. The variety here keeps things fresh, and the backgrounds, ranging from cities to dungeons to mansions, offer some gorgeous 8-bit art.

Where Project Doom stopped cold for me, sadly, was Level 3’s boss, a staff-wielding figure that looks a bit like Magneto and shoots fireballs. His spinning staff, charges, and fire blasts were impossible for me to dodge, and I found my health bar spun down to zero again and again while barely landing a blow. The Switch’s rewind feature, which has been helpful in figuring out other NES games, was useless here. There are playthroughs showing it can be done, but it was beyond me.

Vice: Project Doom offers some wonderful 8-bit art, over-the-top plot with enough to keep a player engaged from level. If you can make it through Level 3, there’s a fun and intriguing game to be found.