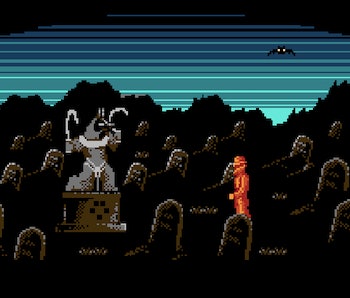 Old video games can offer a variety of history lessons for the curious player. There's an understanding of how a genre evolved, as well as the crate-digger's hope of finding some forgotten gem. The 1992 NES game Nightshade offers a bit of both. The Australian-made title offers a surprising cornucopia of game mechanics, and even if the parts never quite equal more than the sum, it's still a fascinating and fun effort exploring them.

If you're a paid Nintendo Switch Online subscriber, you can play Nightshade right now by downloading the Nintendo Entertainment System app.

Between Tim Burton's 1989 Batman, Warren Beatty's 1990 Dick Tracy, and the 1992 debut of Batman: The Animated Series, retro-noir style had a big moment between the glam 1980s and the grunge '90s. This typically meant seedy underbellies, stoic yet smart-talking detectives, and an art deco city fleshed out with visually memorable friends or foes. Nightshade fits into this moment perfectly, offering a balance between wry humor and violence.

Nightshade places you in the dark sewers of Metro City, which the player learns through an introduction was once the type of place you could raise a family, a type of place where you felt safe, before a crime wave hit. Metro City’s sole hero, Vortex, fell victim to the criminals. Now, as they begin to organize amongst themselves under the Egypt-themed villain Sutekh, one person, Nightshade, armed with only a trenchcoat and fists, will bring them down.

That is, if anyone knows who he is. Tongue firmly in cheek, Nightshade the game makes Nightshade the hero’s popularity a central stat in the game, rising and falling based on his various actions. If he escapes Sutekh’s traps, it rises. If he tries to pick a fight with a bird in the park, it falls. The denizens of Metro City respond to the hero meter, eventually revealing secrets when you’ve proven yourself enough in their eyes. But chances are you will most likely be watching your health meter more, considering that Nightshade’s combat is very hard.

Most of the game functions like a standard point-and-click adventure, the type made famous by LucasArts in 1987’s Maniac Mansion and Sierra’s King’s Quest series. This style lends itself to humor, given how players typically move at the pace of text boxes and are constantly scanning rooms for the slightest detail. Nightshade is full of these details, offering sometimes hyperbolic reactions (you can’t go into a dark tunnel because it’s too scary, meaning you need to find a flashlight) and little details that change over time, like how the paintings in Sutekh’s lair will change to show more and more exaggerated fear.

But as you’re escaping his lair early in the game, Nightshade encounters what appears to be a policeman. Suddenly, the two of you are in a fight, and he is moving very quickly. It’s possible to defeat him, but it will take some getting used to. Despite the fact that you’re picking up bones, crowbars, and a variety of potential weapons, you’re stuck with punching and jumping your way through enemies here. And they’re tough, moving at a rapid pace and hopping all over. Don’t be surprised if you find yourself dying several times on your way to herodom, which leads you to encounter Nightshade’s biggest weakness: its complete lack of a save function.

Paul Kidd, Nightshade’s director, writer and lead designer has said in interviews that his team was not “allowed to have any battery-backed ROM,” meaning that “if you died in the game, there were no save points!” The development team found a somewhat clever workaround here: when a player dies, they are transported to a complex, James Bond-style elaborate death trap from which they can potentially free themselves. This is a cute idea that speaks to the team’s creativity, but these traps are not intuitive (although I identified how to stop Nightshade from moving on a conveyor belt to get crushed, I was unable to pull the right lever). There really is no replacement for a normal save structure, or even the password system common in the era.

There’s the frustration of saving, an odd point-and-click system, weird fights. Yet Nightshade is still worth playing. It’s a classic example of a development struggling against tight budgets. When Sutkeh is sending Nightshade to his doom and calling him “Lampshade,” or when you’re exploring Metro City in another NES version of a proto-open world it endears the player to the game. Nightshade the game feels just as much an underdog as Nightshade the would-be hero.

The game is fully named, rather ambitiously, Nightshade Part 1: The Claws of Sutekh, with clear hopes for a sequel. While that never materialized, developer Beam Software was able to give players a version of the game with several of its kinks smoothed out: 1993’s Shadowrun on the SNES, which incorporated several of the game’s main concepts while making crucial improvements (like a save system). But still, the game has a charm all its own.