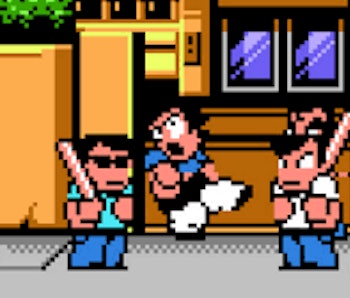 With the simplest of prompts, River City Ransom sucks a player into its world. It wasn’t the first open-world game, but as an early entry in the genre, the 1989 NES game showcases the possibilities of a non-linear play style decades before Liberty City in Grand Theft Auto 3. It’s a fast-paced, intense fighting world that keeps the player on their toes as they move from area to area.

If you're a paid Nintendo Switch Online subscriber, you can play River City Ransom right now by downloading the Nintendo Entertainment System app.

With the option for one or two players, River City follows high school students Alex and Ryan (differentiated only by the color of their shirts) as they attempt to save Ryan’s girlfriend Cyndi from a villain named “Slick.” On the surface, this is a pretty similar set-up to that most classic of NES games, Super Mario Bros. But the delivery couldn’t be more different.

River City’s game style was likely inspired by another classic that came out two years earlier, Double Dragon. Like that game, River City Ransom allows Alex and Ryan to move all over the screen. They can kick and punch, but the real damage comes with weapons. Brass knuckles (my personal favorite), whips, two-by-fours, rocks, boxes, and enemies can all be used to thwack an opponent or as a ranged attack with a throw. A hit will knock them out of anyone’s hands, including your own, and defeating an enemy will result in a nice, shiny coin to collect.

These coins can pay for a series of power-ups in the game’s mall areas. River City’s power-ups take the form of food and books, with the former improving stats and the latter teaching new skills. There’s a real joy in watching your character sit down at the sushi restaurant or pastry cafe, make their selection, and chow down. One tip: the game does not reveal how these foods or books will affect a player after purchasing them, so it’s worth having a game guide open to help strategize between wanting a tuna roll or croissant.

But honestly, one of the greatest things about River City Ransom is what would help drive the popularity of open-world games years later: the sense of discovery. As you explore the town looking for enemies to fight to eventually rescue Cyndi (there’s no real rush on this), you encounter a variety of gangs with simply delightful names. The Generic Dudes! Frat Guys! Jocks! Home Boys! Internationals! The list goes on and on.

If you know anything about River City Ransom, it might be that when you hit an enemy, they tend to say “BARF!” This is most likely an odd translation of a generic Japanese phrase for coughing up blood, but it’s the type of thing that quickly grows on you. There might not always be time for reading, though, because whatever the gang, their members come at you fast and furious. Timing out punches and distance attacks are crucial.

You’re mainly fighting, eating, and reading while playing River City Ransom, but these three are always in communication with each other. Should you go through a quick run of Generic Dudes trying to earn the cash for swordfish sushi, or is it worth patching yourself up with a bagel and muffin at the bakery? Such are the decisions of life.

Every move you take in River City Ransom is more complex than it seems. A button mashing beat ‘em up transforms into a journey of food and exploration. Games like A Link to the Past and Super Metroid would build on this complexity, but neither of them have the light-hearted style of humor that River City does. If you’ve never played it, you should.