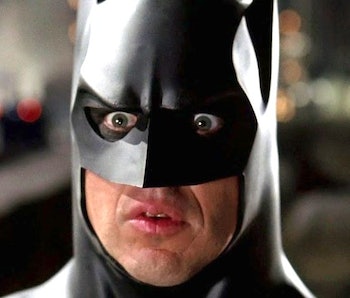 Catwoman's boots are made for walking — between reboots. In a collection of new set photos of the Liverpool set of The Batman, the DC superhero movie slated for 2022 (formerly 2021), some surprising new details emerge surrounding this dark interpretation of the Dark Knight. This includes a connection to the classic Tim Burton movies.

What Happened? — On Sunday, JustJared published a collection of paparazzi photos of the set of The Batman, the DC superhero movie starring Robert Pattinson from director Matt Reeves. The movie, due in theaters in 2022 (because coronavirus), has resumed filming following a long summer pause in production caused by the Covid-19 pandemic.

Based on what we can see, we can deduce the outdoor rain scene takes place at the funeral of Gotham City mayor Don Mitchell, an original character not from the comics. Also present in the scene are Robert Pattinson, as a moody Bruce Wayne; Zoe Kravitz, as a stylish Selina Kyle; Colin Farrell, in heavy makeup as Oswald Cobblepot, a.k.a. "The Penguin"; and John Turturro as Carmine Falcone, a major character from the Batman comics as the head of the Falcone crime family. Other pictures show a crowd of extras and on-set crew, almost all of them wearing face masks in between shots.

Kitty Boots — One of the most interesting details in the paparazzi photos are Kravitz's long leather boots. As observers on Twitter have pointed out, Kravitz's boots bear a heavy resemblance to the ones Michelle Pfeiffer wore as Catwoman in Tim Burton's 1992 sequel Batman Returns.

It's not that the boots are similar. It's that Kravitz's boots look exactly the same Pfeiffer wore, to the point it's possible they're the exact same pair. (Though leather costumes for movies famously don't have a long shelf life, so it's highly unlikely.) Still, the resemblance is uncanny and a nice nod to the history of Batman on film.

Elsewhere in Gotham City — Besides Kravitz's boots, there's plenty to glean from these photos of The Batman. The outdoor shoot seems to continue a funeral scene from the trailer, where we previously saw Pattinson in the same clothing and makeup.

The photos overall offer a new look at Colin Farrell's totally wild Cobblepot. Farrell, who has regularly been deemed "Sexiest Man Alive" by various magazines, looks — well, like a long shot to receive that title again in his make-up for The Batman. It is no doubt a fascinating physical transformation that has fans eager to see his onscreen performance.

Another collection of photos also reveal what could be Batman and Catwoman's motorcycles, which feature a stylish flair not seen in quite a while. Note the bat-like silhouette on the motorcycle, which calls back to the 1960s television series featuring bat wings and ears.

The Inverse Analysis — While film and TV productions have been impacted hard by the novel coronavirus pandemic of 2020, some major movies and TV shows have been able to resume, such as the case with The Batman. And with a distant release date in 2022, it's possible fans will get to see Matt Reeves' gritty take on Batman in theaters, though who knows what state the world will be like then.

But that's the future. For now, keep walking like you've got your own pair of Catwoman boots.