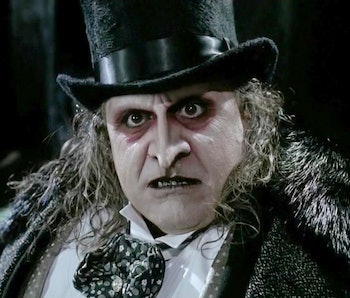 When you’re the director of a major superhero movie, you can announce your stars any way you please. For The Batman 2021 director Matt Reeves, it’s tweeting from Giphy.

On Monday, following a weekend of speculation over leaked behind the scenes photos of The Batman in London, director Matt Reeves confirmed that actor Colin Farrell will play Oswald Chesterfield Cobblepot, also known as the villainous crime lord “The Penguin,” in his 2021 DC superhero film.

And Reeves’ confirmation is only the latest in a pattern from his previous cast announcements: Tweeting a GIF of the actor from one of their previous movies.

“Wait — is that you, #Oz?” Reeves tweeted, along with the bat emoji. (“Oz” is short for Oswald.) The GIF is a short loop of Colin Farrell shrugging, from the 2008 film In Bruges, for which Farrell won a Golden Globe for “Best Performance by an Actor — Comedy or Musical.”

You don’t have to scroll far to see this is Reeves’s modus operandi to reveal stars in The Batman, which is expected to hit theaters on June 25 of next year.

Before Farrell, GIFs of Peter Sarsgaard (in 2015’s Experimenter), John Turturro (in 1998’s The Big Lebowski), Andy Serkis (running down a red carpet), Jeffrey Wright (in a 2018 short from The Atlantic), Paul Dano (from an unidentified clip), and Zoë Kravitz (in a 2016 YouTube video for Vogue) were also tweeted by Reeves to confirm their involvement in the film.

Colin Farrell is a bold, perhaps unexpected choice for the Penguin, who exists as DC’s take on early 20th century crony capitalists. Debuting in comics in 1941 and famously played by Danny DeVito in the 1992 film Batman Returns, the character is often illustrated to be short, round, pale, with dark eyes and an elongated nose sprouting from a circular face.

A metaphor on the tuxedo-like appearance of emperor penguins, the Penguin is the dark reflection to Bruce Wayne’s wealth, showing Batman what he could become should he let his greed trump his altruism. The Penguin operates out of Gotham City’s most exclusive club, the Iceberg Lounge.

Farrell, who has made multiple “Sexiest Men Alive” lists published by People , Empire, and Glamour, doesn’t immediately evoke the look of the Penguin. In fact, he looks more like an ideal candidate to portray Bruce Wayne than Oswald Cobblepot. But as a veteran actor with both a Golden Globe win (for In Bruges) and nomination (for The Lobster), Farrell is more than capable of transforming into one of Gotham City’s most infamous rogues.

The Batman, which will star Robert Pattinson in Batman’s earlier years fighting crime, has begun principal photography. Early leaks already confirm that the film will take place in the early 2000s, though anything else regarding the plot remains shrouded in mystery.