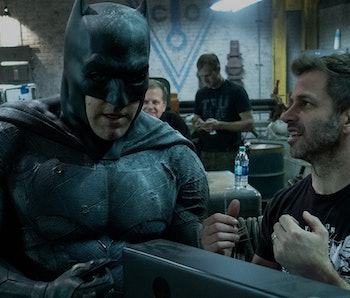 Amid swirling rumors of which film director might take over DC’s next Batman movie, Matt Reeves has stepped forward. Reeves, who directed Cloverfield and several Planet of the Apes reboot films, has announced that he’s up to the challenge of keeping Ben Affleck’s Batman relevant and engaging. Will he pull it off?

Matt Reeves began his career as a Hollywood screenwriter before transitioning to directing, cutting his teeth on the 2008 film Cloverfield, produced by J.J. Abrams. From there, he directed the 2010 American remake of the Swedish vampire horror-romance film Let the Right One In (changed to Let Me In for the remake) before directing his biggest film to date — the sequel to the Planet of the Apes reboot, Dawn of the Planet of the Apes. Reeves also directed its sequel, War for the Planet of the Apes, which is currently in production. With a filmography mixed with blockbusters and moody horror films, Reeves feels like a perfect fit for the Dark Knight.

Reeves says, “I have loved the Batman story since I was a child… He is such an iconic and compelling character, and one that resonates with me deeply. I am incredibly honored and excited to be working with Warner Bros. to bring an epic and emotional new take on the Caped Crusader to the big screen.”

Matt Reeves will take over for Ben Affleck, who was originally slated to write, direct, and star in the solo Batman film. Unfortunately, Ben Affleck stepped back from the director’s chair to better devote himself to the role. The script, which was being written by Affleck and DC Films Co-Chief Geoff Johns, was rumored to have stalled after initial reports that the film would try and include as many famous Batman villains as possible. The press release for Reeves’s announcement did not include any information about who is currently attached as screenwriter or a release date.

The film tentatively titled simply as “The Batman” will be the first solo Batman film in the DC Universe since Christopher Nolan’s Dark Knight trilogy, and since, Ben Affleck first appeared as Batman in 2016’s Batman v Superman: Dawn of Justice, which was officially a sequel to 2013’s Man of Steel. Hopefully, now that the film has an official replacement for Ben Affleck, development of the new Batman film can continue smoothly.

There is no set release date for DC’s next Batman film.