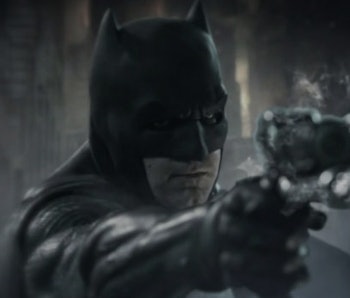 There’s a reason why Batman doesn’t have superpowers: He’s only human. In several interviews, including an appearance on Jimmy Kimmel Live, Ben Affleck admitted to the immense pressure placed on him to write, direct, and star in a major superhero movie. The Batman (still a working title) is moving forward, and Affleck is just trying to be careful as he satisfies the character’s legion of fans.

Telling Kimmel that he’s “still working on it,” Affleck has said it’s been “really frustrating” regarding the creative process. While promoting his new period thriller Live by Night, Affleck said it took him “a year and a half to write it and get it ready” and he also said, “I worked really hard, and nobody gave a shit. No one was like, ‘Where’s Live by Night? But with Batman I keep on getting, ‘Where’s the fucking Batman?!’ and I’m like, ‘I’m working! Can you give me a second?’”

In an interview with IGN, Affleck described the process in crafting a Batman movie, which he says rings true for any movie. “There’s great stuff in it now. It just needs to get better and better. It’s the same way I felt about [Live by Night]. It’s just that nobody gave a shit, because there was never any click-throughs.”

Truly, Batman does not hold back. So when he says he’s ready, he’ll be ready.