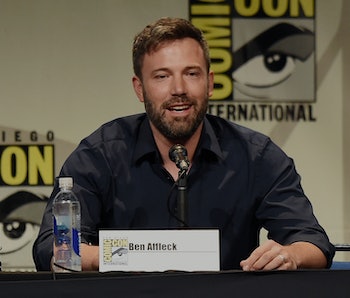 Despite his acclaim as an auteur in recent years, Ben Affleck hasn’t shaken off his image as a mid-2000s heartthrob. So when the Gigli star and admitted failure as Daredevil was selected by Warner Bros. to be Batman for Batman v Superman: Dawn of Justice and its upcoming Justice League, nerds went apeshit. Petitions were sent to the White House. The man got death threats. It was bad.

But that’s all changed in the course of a single weekend. A new TV spot for Batman v Superman hit the web, and in just 30 seconds a new Dark Knight has risen. An intense exchange with Affleck’s Bruce Wayne and Jeremy Irons’ Alfred has shifted popular opinion.

We don’t recommend this often because it’s generally hazardous to your mental health, but look at the YouTube comments. You’ll see haters who have become lovers.

Soon, the world will unite under a common belief and world peace shall be achieved.

“Batfleck” is no longer a curse word at Comic-Con.

This has also inevitably brought out the “See? I told ya so!” crowd.

But regardless of where anyone once stood, there’s no mistaking how much a single trailer with simple but effective editing — coupled with worthy dialogue thanks to Chris Terrio’s rewrites — has swayed public opinion in a flash.

Of course, those with better judgement will have already guessed Ben Affleck would be fine as Batman; it’s just a matter of degree. Affleck has matured as a performer, and in this stage of his career it’s not unreasonable to believe he could relate on a sublime level to an older and weary Batman.

It’s also fitting how history repeats itself. In the late ’80s, Michael Keaton was fresh from Mr. Mom and had signed on to play Batman, which also riled up geeks to petition (and, shockingly, this was pre-internet). So relax, nerds. Warner Bros. knows how to pick good Batmen. Except Val Kilmer.

With Ben Affleck primed to direct an entire Batman trilogy starring himself, maybe he will be the future of the DC Universe. Sorry, Jason Mamoa.