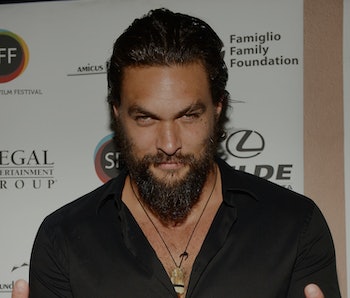 In the epic battle for dominance between Marvel and DC, Marvel had a clear head start. Its meticulously planned Phase 1, coupled with the inimitable Joss Whedon, gave it momentum into it first major setpiece, The Avengers, to record receipts.

DC, in comparison, is doing Suicide Squad — its first big team movie — no favors in setting it up to confusingly introduce every character at once instead of pacing the audience with coherent connections. It will be helmed by the guy who did the first Fast and Furious movie, which was known for many things, scintillating dialogue not most. Also, the first entry in the Marvel Cinematic Universe, Iron Man, laid a solid foundation. By contrast, the joyless and over-harsh Man of Steel set up DC’s universe on shaky ground.

It’s all enough to make any DC fans brood like Sad Batfleck.

If it weren’t for one man who holds the weight of the DC Cinematic Universe and its hopes for success on his ample shoulders: Jason Momoa.

Jason Momoa is, first and foremost, the only man in Hollywood who has any chance whatsoever of making Aquaman cool. Aquaman is essentially a glorified merman for fuck’s sake. Whether they’re unfairly persecuted or not, pop culture doesn’t have a great track record with making it easy to take mermen seriously.

But nobody in their right minds would ever giggle at this guy.

Outside of making Aquaman cool, Jason Momoa is the DC Universe’s hope because he might just be the guy who gives Suicide Squad that coherent link it desperately needs.

The Avengers worked because comic book fans and newbies alike had the opportunity to be on equal footing. Previous films gave viewers a solid understanding of the heroes’ personalities, which freed the group to build chemistry without having to wade through exposition. Suicide Squad is potentially hamstringing itself by shoehorning in too many introductions and backstories. For all its flaws, the Marvel Cinematic Universe is good at building links between its films. DC seems to be floundering. Cue Aquaman, who’s still a couple of years away from his standalone flick.

Rumor has it that Aquaman might appear in Suicide Squad, or at least play a role as a name and a background presence. In particular, rumors surround his trident’s place in Amanda Waller’s trophy case.

The DC Cinematic Universe still has a lot of catch-up to do before it reaches Marvel’s coherency, and yoking its fate to Momoa doesn’t mean it can’t still be a failure. But with with this guy as the future, if it is a failure, it will be one that’s noble as hell, with a funeral pyre fit for kings.