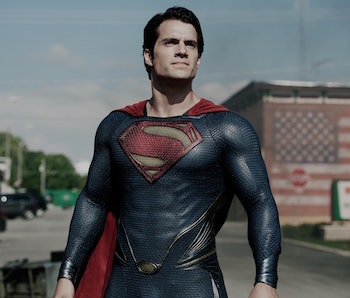 It’s been some three years since Warner Bros. embarked on establishing their Justice League cinematic universe. As Batman v. Superman waits around the corner in 2016, let me remind you: Man of Steel laid down some weak ass foundations on wet as hell mud and it threatens to handicap Dawn of Justice.

Yes, Dawn of Justice is burdened with its own issues that aren’t solely because of Man of Steel. The movie sporting a hilariously grim tone, even for superheroes, is not because of Steel, but it is picking up where it left off. The most offensive of its offenses is a flawed thesis of Superman’s id. You know, one of the most iconic representations of a better tomorrow? In Zack Snyder’s 2013 introduction, that guy mopes around for like an hour. Because he’s like, different.

Was his living as an outcast producing a villain instead of a superhero?

A red flag by Man of Steel: Superman has anxiety about living as a god. He doesn’t know what to do with his gifts, and for 30 years he walked as an outsider because of it. It’s Snyder’s attempt to humanize the Last Son of Krypton, evoking paranoia felt by the marginalized in America throughout the last century. After Clark saves his classmates who would have otherwise drowned in their sunken school bus, what does Papa Kent say?

But Papa Kent in the 1978 Superman offers a different lesson. He warns Clark about using his gifts responsibly. He knows he’s meant for something, someday, and it’s not “to score touchdowns.” To borrow and twist from another red and blue-clad superhero, with great power comes great responsibility. Not hiding out like a doomsday prepper.

Jonathan Kent’s jarring lesson in Man of Steel is antiquated yet modern, similar to stories from people who grew up “different.” Anyone who struggles to come out about their sexuality or immigrants who aspire to acclimate in their new home can maybe relate to Papa Kent’s overprotection of Clark. After that one September morning in 2001, many American-Muslim women have taken off their hijab head scarves to become “more American.”

Of course Clark shouldn’t brag about being Superman, but his motivations in Man of Steel come from a darker place than where it had been throughout his incredibly storied history. Man of Steel isn’t about protecting others or how to responsibly improve the world. For the first hour, it was about not being a freak.

Zack Snyder is a rather powerful name. He’s been Warner Bros.’ shepherd of the Justice League and he’s helmed big-budget projects for the better part of the last decade. He had the unenviable responsibility of translating Alan Moore’s Watchmen to screen, and now he’s bringing pop culture’s most recognized to compete against DC’s historic rivals at Marvel. Was Man of Steel a coded cry from Snyder for someone to lift the weight off his back? (For what it’s worth, Snyder can do some heavy lifting on his own.)

So what if Clark just needs some 1:1 time with Madame Trinity? It brings a whole new meaning to “Man of Steel,” but Superman shouldn’t have to find solace in a strong, busty woman who can tie a mean rope (he usually teams up with them). Rather, the Superman we knew and should know is a man whose chin looks up, not down on himself. It’s relatable for the marginalized to see a strong-jaw want to hide, but Superman shouldn’t be relatable because he should be aspirational.

One doesn’t need to look far for a remarkable contrast: We have Supergirl. Kara Zor-El has spent her first season thus far refusing to hide, and she fights to take up the responsibility instead of give it up. In the first forty minutes of Supergirl, Kara inspired far more than most of Man of Steel.

But Man of Steel does try, kinda. When Kal-El accepts his destiny as Superman, his immediate act is to give himself to Zod to protect Earth. It’s not quite the same as saving a plane and feels slightly more hostage situation-y, but it’s still for the good of the people so it works. And there are echoes of Richard Donner’s Superman found in Jor-El, who gives a vaguely similar speech like Marlon Brando’s.

“You will give the people of Earth an ideal to strive towards,” Russell Crowe’s Jor-El tells his son Kal-El. “They will race behind you, they will stumble, they will fall. But in time, they will join you in the sun.”

But it’s a hard sell. It’s nearly impossible to compromise Man of Steel as a movie with its vision of the character, which clearly still wants the classic Superman in spite of its shitty modern take.

Dawn of Justice will address that and retroactively turn it into reason. Man of Steel was the beginning of the Justice League universe, and like Marvel’s The Avengers it’s introducing a vulnerable Earth to the galaxy. There are dangers that await outside Earth’s doorstep — humans are ill-equipped to fight, and dumb ass Superman kicked the door wide-open. First impressions are everything? Superman ruined the carpet and upholstery.

That’s how a xenophobic, paranoid Bruce Wayne comes in. He’s the elusive billionaire who has lost more than he’s loved. Dawn of Justice will be a gladiator match with the human race at stake (as it tends to be in all superhero movies). Zack Snyder is introducing Batman and framing him as the villain in rough terms. But if it’s starting from Man of Steel then Dawn of Justice is working from a faulty foundation and illegible blueprints. Batman is the one fighting to protect people from the guy that brought the danger to Earth. Maybe Batman is the hero and Superman is the real evil.

And I don’t want to live where the paranoid and the xenophobic are whom I cheer. No thanks. Can Batman and Superman just kiss and make up instead?