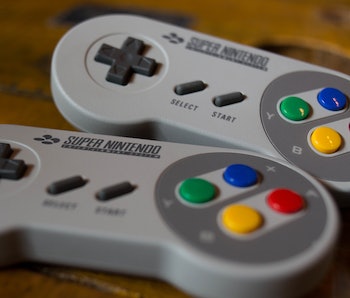 Operation Logic Bomb: The Ultimate Search & Destroy may not come to mind when you think of classic SNES games. It was made by Jaleco, a company originally named Japanese Leisure Company that never reached the critical or commercial success of Konami, Tecmo, or other titans of the era. Specializing in arcade games, the company had some success in the 1980s which failed to translate to the next decade. No wave of nostalgia for the often average-at-best Jaleco.

Which is what makes their 1993 game Operation Logic Bomb so surprising — it’s actually pretty good.

If you're a paid Nintendo Switch Online subscriber, you can play Operation Logic Bomb right now for free by downloading the Super Nintendo Entertainment System app.

An overhead free-roaming shooter, Operation Logic Bomb follows an anonymous soldier (Wikipedia tells me that he is code-named HIRO and named “Agent Logan” in the Western version of the game, this is not mentioned in the game itself) as he patrols the levels of a futuristic lab where a science experiment has gone horribly wrong, creating a dimensional rift with invading monsters.

Parts of this story are told in bits and pieces throughout the game through recordings that the player gets to view, although they are told a little too quickly to quite make sense. But they look really cool, which is a plus.

Operation Logic Bomb has a surprising complexity to it, taking on some of the elements of a Metroidvania, of all things. Most overhead free-roaming shooters, like the cult classic Smash T.V., operate on a search-and-destroy ethos. Clear one room, on to the next. But Logic Bomb has Agent Logan moving backwards at times, using weapons acquired on Level 3 to tackle problems on Level 2 and getting to unlock the puzzles needed to reach Level 4.

There are a few things holding Operation Logic Bomb from reaching the elite tiers of SNES canon where Super Metroid and A Link to the Past reside. The enemies are mostly repetitive, switching between a variety of security robots, enemy soldiers, and creatures from the other dimension that look like pieces of trash.

Perhaps Jaleco was able to tell the story in the game’s physical manual when selling it in 1993, because it is very hard to piece together in the game alone. And while the game’s low saves are somewhat negated by the Switch’s ability to rewind the game, and they add a level of difficulty for some, it was a little frustrating to see a GAME OVER just as I figured out a puzzle.

So it’s not a perfect game. It’s still incredibly fun—figuring out the complexity of the levels was just hard enough, taking on new guns kept the gameplay fresh even when the enemies looked the same.

Jaleco’s story ends in a boring, corporate fashion. While some employees remember the studio fondly, the company was tossed aside in a bankruptcy filing by its parent company in 2014 and hasn’t existed since. It’s intellectual property was bought by a company named after one of its games, City Connections, which seems to be bringing them to the Switch Online. Whatever the case, Operation Logic Bomb is a hidden gem ready to be explored.

More like this
Gaming
8.14.2022 3:00 PM
You need to play the most exhilarating free game on Nintendo Switch Online ASAP
By David Grossman
Gaming
8.2.2022 2:00 PM
33 years ago, one Nintendo innovation changed how we game forever
By Willa Rowe
Gaming
13 hours ago
10 years later, the Nintendo Wii's most underrated RPG is due for a remake
By Hayes Madsen
Related Tags
Share: