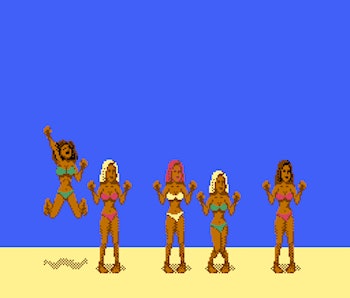 The central challenge of any good racing game is taking everything in. There’s the setting, your opponents, and your vehicle itself, all of which are moving rapidly. A successful racing game combines these elements in new ways to keep the player intrigued, even after the first try.

Across all of these measures, the 1991 NES game Eliminator Boat Duel is mostly a blast. The racing is fun, the opponents are memorable, and the upgrade system offers a strategy component. Even if the courses don’t change too much, they offer enough of a challenge to keep playing.

Eliminator Boat Duel was released in North America in November 1991, a few months after the North American release of the SNES classic F-Zero. F-Zero promised players a fantastic futuristic city and new worlds, while Eliminator Boat Duel offers open water, bayous, and wharfs. While that might not sound as intriguing as what F-Zero had to offer, the game offers any numbers of charms to keep a player coming back to the water.

The game only features two racers at a time, which keeps the action focused. There’s a two-player mode and a series of competitors that the player can work through solo. From Punch-Out!!! to Pilotwings, having levels focus around a specific opponent is a strong tactic in older sports and vehicle-based games, where personalities might not get a chance to shine during the action.

The characters that I was able to face, Seasick Steve, Aquarius Rex, and Surfer Bob, were all enjoyable in their own right. There’s no real explanation of who these people are or why we are dueling to elimination, but a good opponent in a game like this has a specific bit that they follow through on, and Aquarius Rex’s Jerry Garcia vibe couldn’t help but make me smile, even as he was beating me and telling me how I needed to align my karma.

The actual racing in Eliminator Boat Duel is very short. There are no laps, rather just a start and a finish. But the game mixes up its visual style, moving between side view showing off the boats and bikini-clad flag-waver at the start of the race —there are many bikini-clad fans? Models? People? in Eliminator Boat Duel. Another 3D perspective puts the player behind boats as they dodge various flags and wooden planks, and an overhead view allows the game to through a variety of watery obstacles, like sharks and people, as well as rewards like cash and nitro boosts. And finally, every match ends on the same side-view, with particularly close races earning a demand of a slo-mo replay from the bikini-clad fans, who seem to be the only people invested in these boat duels. While the slo-mos never truly decided a race, watching a close victory again felt rewarding.

There are a few basic strategies in the game, like jumping on an opponent’s boat or using a nitro boost at the right time. But the real work comes after the race, where the player is presented with options for repairing damage from the last race as well as upgrades. Nobody will mistake this for the upgrade systems in Gran Turismo or Forza, but it is interesting to decide between improving steering for the next race or saving up to go all-in on improving your hull.

Eliminator Boat Duel is more unforgiving than, say, Super Mario Kart. If you fall behind—hit too many buoys, make a wrong turn in open water—it’s very difficult to catch up to your competition. When you lose once, the prize money disparity is large enough that your opponent will be upgrading their boat at a level you cannot. And because of the game’s tough rules, with three losses overall earning a game over, there isn’t much of a chance to fight your way back. I found myself using the Switch’s rewind option several times, trying to turn the corner just a little bit sharper.

While Eliminator Boat Duel does not live up to its cover art, which promises a Lisa Frank-meets-Miami Vice fever dream, but it is a fun racing game that ends quickly. It’s a perfect twenty-minute distraction, and a player looking for reasons to come back will find them all over the water.