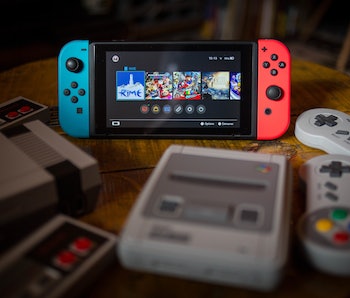 The joys of a racing game are myriad. Many games in the genre are built as technological showcases, which can make gameplay feel like an afterthought — until you get your hands on one. Once you do, there are patterns to learn — what each turn on each track feels like, which ones will let you get away with going into the rough for a little bit and which ones demand all your attention.

And then there are the cars! Sometimes this choice is crucial for gameplay, other times it’s just for aesthetics. F-Zero for the Super Nintendo manages to capture all of these dynamics, securing its place as one of the greatest racing games of all time.

If you're a paid Nintendo Switch Online subscriber, you can play F-Zero right now for free by downloading the Super Nintendo Entertainment System app.

While the plot of F-Zero is not present in the game, producer Shigeru Miyamoto (creator of the Mario and Zelda franchises) and director Kazunobu Shimizu made sure to include a complete cast of characters in the original manual. There, players were introduced to the likes of intergalactic bounty hunter Captain Falcon and his rivalry with Samurai Goroh, among others.

These characters don’t have much impact into the gameplay, it’s all up to the player’s imagination to think of what’s going through their driver’s mind when the Fire Stingray smashes into the Blue Falcon going 350 MPH. But that’s half the fun — the same way kids put their own imagination into toy cars.

Of course, there’s the race to focus on. F-Zero’s tracks are where the game gets to show off its technical capabilities, the first Super Nintendo game to use the system’s Mode 7 graphics, which allowed for a background layer within a game to be rotated and scaled on a scanline-by-scanline basis, allowing for the appearance of a third dimension. Mode 7 could only work on backgrounds, not characters, which mean that games like F-Zero and Pilotwings, which emphasized machines over people, were the perfect showcases.

The tracks, with evocative and mysterious names like “Mute City,” “Port Town,” and “Silence,” each taking a different color palette and creating an entire vibe. Unlike another popular SNES racing game that used Mode 7 to its advantage, Super Mario Kart, F-Zero keeps the power-ups to a minimum. There are small ramps that can give your racer a small aerial boost, and a small speed boost for each lap completed, but that’s about it.

Most elements on the track are a danger to the player, with slip zones and magnets that threaten to pull the hovercar off course. A player can only take so much damage before they explode into flames on the track. Thankfully, knocking into other hovercars causes only minimal damage, meaning you can finally show that Captain Falcon a piece of your mind.

The racing in F-Zero is fast-paced, energetic, completely engrossing, and over in minutes. The music is great, the Mode 7 scaling gives each level a sense of depth, and you’ll probably burn out in flames several times before winning. But when it all comes together, racing game fans know there’s no better feeling.