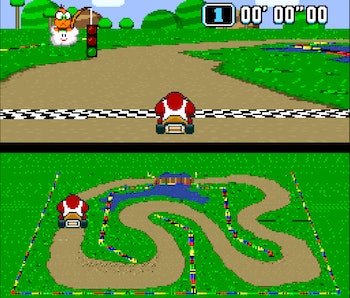 It’s not really fair to compare a Super Nintendo game to its subsequent sequels on more recent platforms. Starfox and Starfox 64, just to name two, were made with completely different technical capabilities and developers who had to work within them. But in the case of Super Mario Kart, it’s hard not to look at the later versions of the game. After all, so much of what has come afterward started here, and the game still holds up 29 years later.

If you're a paid Nintendo Switch Online subscriber, you can play Super Mario Kart right now at no added cost by downloading the Super Nintendo Entertainment System app.

1992's Super Mario Kart is not the most complex racing game on the Super Nintendo, that title goes to F-Zero. F-Zero offers more strategy within racing, as well as more diversity in the type of tracks on display. Mario Kart can come off as deceptively easy at first. But as one delves into its gameplay, it’s easy to see how the game became the foundation of kart racers for decades after.

Super Mario Kart breaks down its eight characters into four adorable groups: The Bros (Mario and Luigi), The Dragon and The Lady (Yoshi and Peach), The Showdown (Bowser and in his only Mario Kart appearance, Donkey Kong Jr.) and The Small Guys (Koopa Troopa and Toad). While these groupings sadly don’t appear in the Switch Online port, they breakdown the styles of driving relatively well.

But driving style, from Bowser’s heaviness to Peach’s acceleration, only matters so much in a kart racer. Steady and controlled driving can push nearly any racer to the head of the pack in Super Mario Kart. Get stuck on some blocks or fall into lava on Lap 2, and you should be able to find your way back to first relatively soon.

During the game’s single player mode, the computer typically picks one competitor that will be a serious challenge to the player, and battling with them can make for a fun challenge. Finding each driver’s preferred style can be a joy, like seeing Bowser excel in the sandy terrain of Koopa Beach, is also a joy.

However, Super Mario Kart’s true innovations came in its multiplayer modes. While single-player mode makes for an addictively fun time-killer (an entire Cup of five races takes about twenty minutes), the game introduction of a battle mode gave it the hook it needed to become a franchise. Like F-Zero, Super Mario Kart uses the Mode 7 graphics to create the impression of three-dimensional backgrounds. These backgrounds add a level of depth to the split-screen battles.

The music, the fights, the expanded playable characters, the mixture of fun and skill that it takes to navigate a tricky course like Bowser’s Castle: it’s easy to see why Super Mario Kart, all of the following games in the series, have been huge hits. Super Mario Kart managed to incorporate the excitement of a racing game with the competitive nature of a fighting game, all wrapped up in bright colors of the Mario world. While there are none of the gravity-defying moves that would appear in later iterations, the game absolutely stands up to the high standards of modern Mario Kart.