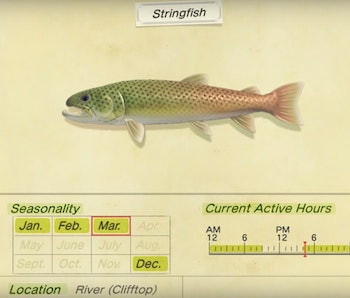 If you are one of the millions of people already playing Animal Crossing: New Horizons, you probably want to fill out the museum with all the unique creatures the game has to offer. Or maybe you just want to sell some rare fish for lots of bells. One of the rarest water-dwellers in the game is the Stringfish, and it can be a bit of a pain to catch due to its location. We're breaking down where to find it, what its shadow looks like, and what you'll need to craft to get it. There's good reason to catch a few, as they can be sold for 15,000 bells each.

Thankfully, you should have it in your museum in no time if you follow these four simple steps. Your first order of business will be making sure you are in the right months to catch it.

Step 1: Check your calendar and watch

As we are nearing the end of March (or September for those with a Southern Hemisphere island), you only have about a week left. Fortunately, Animal Crossing: New Horizons does allow players to "time travel" by modifying the system clock. If you really want to get the Stringfish now, you'll may need to play with the date and time settings on your Nintendo Switch. (Check out Inverse's guide to see what else is impacted by time travelling in New Horizons.)

You have either been patient and waited until the proper time, or become a time-traveling wizard deserving of the magic wand. Either way, now's the time to track that fish down. Stringfish only spawn in rivers on cliffs. That means you'll have to craft a ladder, which is a process in and of itself.

To add a ladder to your inventory, you'll need to build the Nook's Cranny general store after paying off your first loan to Tom Nook. Once the shop is built, Tom Nook will task the player with marking three house plots and will give the recipe for the ladder. If you have four wood, four hardwood, and four softwood, you can craft the ladder at a workbench and reach the rivers where Stringfish spawn.

Obviously, you'll need a fishing rod and some bait in order to get the Stringfish, since your villager can't just stick their stubby little hands in the water. Fortunately, the fishing rod is one of the first things Animal Crossing: New Horizons asks you to craft: all it requires is five tree branches. If you somehow haven't crafted it yet, do so ASAP, or get it out of your home storage.

If you are playing between 4 p.m. and 9 a.m., make sure the ladder, fishing rod, and some fish bait are in your inventory and head out to the hills. Use the ladder to scale the cliffs, track down a river, and throw some fish bait into the water. After you do this, wait for a large shadow to appear in the water and use your fishing rod to catch it.

While this spawn isn't always guaranteed to be a Stringfish, if you have enough bait you should be able to get one in no time. Now that you have the Stringfish, give it to Blathers to add to the museum. The others you can sell for a whopping 15,000 bells at Nook's Cranny. Not a bad deal!