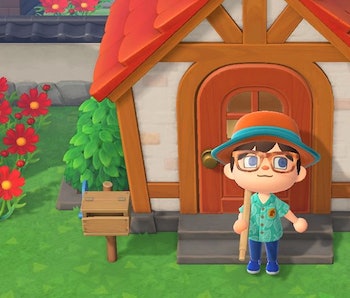 While Nintendo has patched out one item duplication exploit in Animal Crossing: New Horizons, yet another has taken its place. A glitch that lets players copy 2x1 items emerged earlier this May that remains active, but yet another has been discovered that allows players to copy any item they want just by fiddling with the game's multiplayer and autosave features. This means that you can duplicate useful items like Nook Miles tickets and progress through Animal Crossing: New Horizons very quickly.

So if you have the patience and a desperate need to duplicate items smaller or larger than 2x1, here's how to do it.

This exploit for duplicating items is one of the most complicated yet as it requires multiple profiles, the ability to mail items, and more. It was discovered in mid-May, though its origins have proven elusive. Nintendo has been cracking down on videos related to Animal Crossing: New Horizons exploits lately, so many have already been removed from YouTube.

A video by Exotic Echo published on May 19 and seen below breaks down the process. Unless Nintendo patches the game soon, following these steps should allow you to duplicate whatever item you want.

Step 1: Have three playable characters move to your island.

This whole process will require three playable residents on your island, each with their own profile on your Nintendo Switch console. The first one to play Animal Crossing: New Horizons will have to go through the day-long process (that's a real-life day) of moving to and setting up the island. The process will be much shorter for the next two players. The airport will also have to be open, which should happen after the second day on your island. Though this process takes a couple of days, you should within just a few days of starting.

Step 2: Mail a letter to another island resident and summon them to the island.

Once everything is set up, go to the airport and start the process of mailing an item to another player. While bugs and fish can't be mailed, other valuable items like Nook Miles Tickets or Bell Voucher can. As such, this exploit will still allow you to make a lot of Bells very quickly. Simply mail whatever item you want to duplicate to another player-controlled resident on your island.

Once that is done, summon the player that you sent the letter to. This means you'll need an additional controller for your Switch console, which may be hard to do on the Nintendo Switch Lite. You can do this exploit with someone else if need be, but there's no shame in using both controllers yourself.

Step 3: Enter and exit the house so the mail appears.

You'll now want to play as the resident who received the letter. Enter and exit your house so the game autosaves. This should cause the mailed item to appear in your mailbox. If that doesn't work, simply time-travel forward a day and it should be there. Once it appears in your mailbox, take it out and keep it in your inventory.

After following the steps above, go back to controlling the first resident, then use the "Pick Resident Again" function on the Nook Phone to switch back to the resident that received the duplicated item. Wait for the autosave icon to appear, and after it does, check the mailbox again. If everything was done correctly, the same package will appear again in the mailbox.

Keep repeating this last step to duplicate the item as much as you want, and you'll have pulled off one of the most complicated Animal Crossing: New Horizons exploits yet! This will probably be patched out by Nintendo soon if the company is actively having YouTube guides taken down, so use this to rack up some items and Bells ASAP, or at least until the next patch.

More like this
Gaming
8.16.2022 2:00 PM
10 years later, the Nintendo Wii's most underrated RPG is due for a remake
By Hayes Madsen
Gaming
8.14.2022 3:00 PM
You need to play the most exhilarating free game on Nintendo Switch Online ASAP
By David Grossman
Gaming
8.11.2022 3:00 PM
Everything you need to know about Kirby’s Dream Buffet
By Robin Bea
Related Tags
Share: