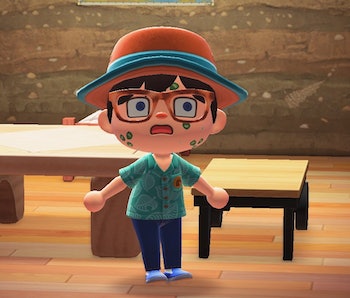 In the early days of Animal Crossing: New Horizons, there was an easy item duplication glitch that players could use to multiply valuable items to then make a lot of Bells very quickly. While that method of duplication was patched out by Nintendo in early April, a new way to duplicate certain items has emerged that might prove to be an easier way to make a fortune without having to mess around with the Stalk Market.

This new method of item duplication was discovered by YouTuber Artificial Switch and allows players to duplicate small 2x1 items like the katanas thanks to an exploit in house customization. Follows these steps and you'll be on your way to making a ton of Bells really fast in Animal Crossing: New Horizons. But it's only a matter of time before Nintendo pushes out a patch to remove this glitch from the game entirely — so do it ASAP.

To get started with this duplication glitch, you'll need three things: a 2x2 table, a 2x1 table, and a 2x1 item. This means you won't be able to start taking advantage of this exploit right away, but you should be able to craft the required materials within a week or so. For their video, Artificial Switch used a Wooden Block Table, which can be crafted with only 15 softwood and a wooden block. For the smaller table, something like the Ironwood Low Table will work.

For the item, you can use something like a Katana or a TV. If you aren't sure if the items that you are crafting are the proper size, that property for any given object is listed right under the object's title on the crafting screen. The number represents how many squares of game space the object takes up.

Step 2: Set up the tables and items properly in your house.

To get this glitch to actually work, you'll need to make sure everything is set up properly in your house. Place the 2x2 table in the center of your large middle room. Then, also place the 2x1 table somewhere else in the room with your 2x1 item on top of it. Once everything is in place, you can finally start the process needed to duplicate the item.

Step 3: Move the table around to duplicate the item

Now that everything is where it should be, go to the house placement menu and pick up the 2x1 table with the item on it. You'll then want to move it so it's perpendicular to the larger table (pointing away from the square table rather than running flush alongside it). Whenever you place the table down, it will snap back to be parallel. Do this a few times around the table and then exit the menu. It will seem like nothing at all happened at first, but you just need to exit the room and walk back in.

When you do, you should see some of the items floating in the air around the 2x2 table. You won't be able to interact with these items here, but you can put them into storage via in the placement menu. Do it as many times as you need and you should be able to rack up thousands of Bells in no time, depending on the value of the item that you duplicated.

The Inverse Analysis — This item duplication exploit is much more complicated than the first one and only works with certain islands and certain items, so it may not be as widely useful to everyone playing Animal Crossing: New Horizons right away. Still, if you have the proper materials and crafting recipes and feel that the Bell grind is too slow, this method is a fine way to accrue the Bells you need.

Keep in mind that you'll want to do this as soon as possible. Artificial Switch's video was posted on May 3, so it's possible that this glitch is already on Nintendo's radar and the company has plans to fix this later in the week. This exploit will definitely be patched out in a future update, so it's just a matter of time. Until then, you can duplicate items with this method to your heart's content.

More like this
Gaming
14 hours ago
10 years later, the Nintendo Wii's most underrated RPG is due for a remake
By Hayes Madsen
Gaming
8.14.2022 3:00 PM
You need to play the most exhilarating free game on Nintendo Switch Online ASAP
By David Grossman
Gaming
8.11.2022 3:00 PM
Everything you need to know about Kirby’s Dream Buffet
By Robin Bea
Related Tags
Share: