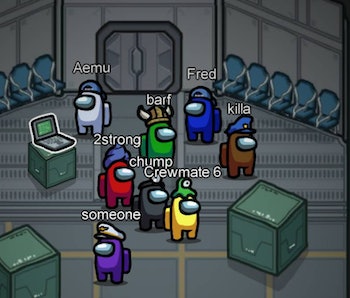 InnerSloth, the indie game studio behind wildly popular sci-fi murder-mystery Among Us, has a surprise in store for the 2020 Game Awards on December 10.

The dev is expected to reveal a new map for the title during the ceremony, an update that it has teased for months now, it announced Wednesday. The upcoming stage has been said to be larger than any of the three current maps. And it's inspired by Henry Stickmin, a series of interactive animated shorts created by InnerSloth dev Marcus Bromander.

But there could be even more news in store for the millions of diehard Among Us fans that have been playing the game incessantly since its serendipitous rise to fame in the summer of 2020.

Among Us new map and cosmetics

InnerSloth teased a snippet of the upcoming map on a new Twitter account it made specifically for Among Us and told its followers to "keep an eye out for The Game Awards," which suggested a full reveal of the addition will be shown off at the event.

Bromander previously tweeted that the new map was "looking to be bigger that Polus," the largest of the three existing Among Us stages. The dev also revealed that the area they showed off is a near-replica of a stage from Henry Stickmin and they even teased some themed skins to stir up more hype.

InnerSloth's segment a The Game Awards will likely include new cosmetic announcements, three of which were teased in Wednesday's tweet (included above). The first was a cyborg skin and a top hat with a handlebar mustache dawned by one of the antagonists in Henry Stickmin: Right Hand Man. The white astronaut to the left of the picture has the CCC Hat equipped with a matching bodysuit, which isn't available in-game at the moment.

The new map and cosmetics appear to be the updates InnerSloth will focus on during the Game Awards, but fans could also get some news about the upcoming friends list update. Patch notes released in early November 2020 state that an in-game account system would arrive by an unspecified date in December to make it easier to "report accounts that are toxic and/or hacking."

InnerSloth Forest Willard previously stated that an account system would be key to bringing the game to consoles. So the Game Awards could also bring about a huge stride towards Among Us Xbox and PlayStation ports. But we'll need to wait for more updates from InnerSloth to be sure, which might come more frequently now.

The indie dev hired Victoria Tran as its new Community Director on November 9, growing its team size to four employees. Tran previously worked as the Community Director of Kitfox Games and will be responsible for tweeting out updates and responding to fans via the new Among Us Twitter account.

That probably means even more teasers leading up to the Game Awards, so it might be a busy few weeks for Among Us.

Among Us is available for PC, iOS, and Android.