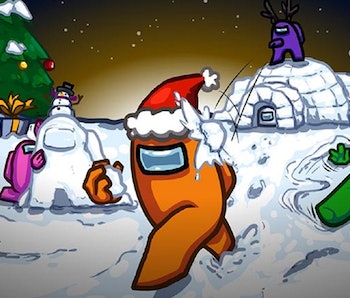 Among Us has become the latest indie game obsession of Twitch streamers and gamers across the internet. The murder-mystery title lets players choose their astronaut's suit color from a palette of 12 options, but hats are another way gamers can distinguish themselves in-game.

Nearly all Among Us headgear comes unlocked if you purchased the game for $4.99 on Steam, and there's a more limited hat selection if you downloaded the game for free on iOS or Android. However, seasonal hats are only available for certain times of the year, regardless of how you got the game.

Currently, Halloween hats can be equipped with Christmas hats to soon follow. But there's a trick both PC and mobile gamers can use to begin rocking Santa hats and reindeer antlers before December comes around.

Among Us was released by three-person studio InnerSloth in 2018 and it surged in popularity in mid-2020 after gaining traction among Twitch personalities. The game assigns players the role of either a "Crewmate" who needs to complete tasks while avoiding being killed by the "Imposters" whose goal it is to murder the crew.

Cosmetics don't do much to help players win a round of Among Us, but they're a fun way to show off personal style and holiday cheer. Here's how to gain early access to the previously released patch of Among Us holiday hats.

Unlock Among Us Christmas hats on PC

Unlocking the set of Christmas hats involves changing the date and time of the device you're running Among Us on, much like "time traveling" in Animal Crossing: New Horizons. The idea is to trick the device into thinking it's Christmas to give you access to the skins.

This works best on Windows 10 devices since buying the PC version of the game gives you full access to all of the game's skins.

Start by right-clicking the date and time at the bottom right of the screen and selecting the "Adjust date/time" option in the pop-up menu that appears. That will open the Settings window, click the "Date & time" tab then select "Change" under the "Change date and time" option.

Unlock Among Us Christmas hats on mobile

Both Android and iOS users can do the exact same thing by navigating to their respective Settings menus and opening the "Date and Time" tab, but sadly anyone using the free version of the game won't be able to equip any of the hats unless they previously purchased them.

Here's a video guide on how to do it using an iPhone:

Changing the date on either mobile app gives users the option to buy the Christmas gear, but since InnerSloth isn't accepting payments for those hats right now it won't go through. You'll only be able to equip the holiday cosmetics if you already bought one when they came out.

So start ringing in the holiday cheer early if you can.