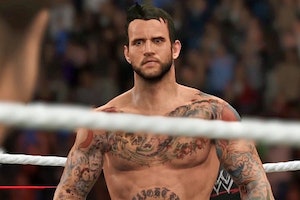 Sure, WWE 2K22 is on the way, but the upcoming wrestling game is about to have some stiff competition. That’s because Yuke’s, the Japanese team that worked on the WWE games for 18 years prior, is now developing an All Elite Wrestling (AEW) game.

AEW is currently competing with WWE in terms of live-action wrestling broadcasts, arguably with a better roster, more personable commentary, and a less sterile and corporate approach to storylines.

Given the rich history and experience of Yuke’s, there’s no doubt the AEW game will be worth paying attention to. After all, Yuke’s is known for fantastic WWE games such as WWE Smackdown! Shut Your Mouth, Smackdown! vs. Raw, and even WWE '13.

But one entry in particular has stood the test of time: WWE SmackDown! Here Comes the Pain is arguably one of the best games in the entire series, and we’d love to see Yuke’s implement some of that game’s most memorable features into the new AEW offering.

What good is a wrestling game if it doesn’t have an up-to-date roster of the current superstars? Part of what made Here Comes the Pain so enjoyable was its roster, which had brand new wrestlers duking it out against past legends.

While the AEW game won’t be able to implement legends since the promotion is only a few years old, it should have a current roster that mirrors the real life list. We already know of some superstars who will make an appearance, and as the AEW roster grows, so too should the game’s list. The known roster is as follows:

The closer the AEW game can get to the real roster, the better. This isn’t always practical due to timing issues and other factors, but if it’s anything like Here Comes the Pain, we’ll be in good hands.

Sports sims can sometimes be off-putting due to how complicated they can be. There’s certainly room for complexities, but it’s easy to see why a newcomer — or someone who doesn't’ play video games often — would be intimidated.

However, Here Comes the Pain was so appealing because it found a healthy balance of sim and arcade gameplay that was complex enough to be satisfying while still feeling accessible. Specifically, its new grappling system was a joy, as it gave each wrestler 16 different base moves to choose from, each maneuver within their own category.

Having 16 moves might not sound like a lot, but it could easily take the entire length of a match to implement all of them, especially if your opponent was good at countering. And that’s not counting the basic strikes, turnbuckle grapples, high flying moves, and finishing maneuvers.

When compared to some of the 2K games, Here Comes the Pain was just right, allowing for plenty of ways to take down your opponent without overcomplicating things. We hope the AEW game strikes a similar balance.

One of the best things about WWE SmackDown! Here Comes the Pain was its engaging career mode, which allowed you to participate in a slew of different storylines depending on the superstar you’d choose play as, along with your decisions.

It was immersive and engrossing, because it followed a full calendar year, allowing you to participate in various title matches, while forming alliances with certain members of the roster. Depending on your performance and how you’d interact with superstars behind the scenes, things would play out differently. This encouraged you to replay the career mode, making new choices with various wrestlers throughout.

Other WWE games have career modes as well, but the one in Here Comes the Pain once again had a perfect balance of complex and accessibility. While many of the newer WWE entries have felt too linear, Here Comes the Pain gave you plenty of freedoms while still keeping you on track.

Yuke’s should use a similar system with the new AEW game to make it as memorable as possible.

Finally, let’s touch on the Create-a-Wrestler (CAW) mode from Here Comes the Pain, because it was way better than you might expect. Even to this day, this is one of the most in-depth creation systems in gaming, allowing you to create superstars who look exactly like their real life counterparts, or even horrifying monstrosities.

Part of what made the CAW mode so robust was the ability to place various pieces of art and symbols onto your wrestler. You could alter the opacity, size, color, and position to form unique creations that helped your wrestler look more authentic. That means any wrestler who wasn’t included in the game could easily be recreated, wherein your only limit is your own creativity.

While we hope the AEW game has a lengthy, up-to-date roster, we also hope the CAW mode is in-depth enough to allow us to add in any missing superstars — or even non-wrestlers! We vividly remember seeing fantastic creations in Here Comes the Pain of famous superheroes like Wolverine, and even action stars like The Terminator.

The AEW game is still a ways off, but it’s currently in good hands with Yuke’s behind the wheel.