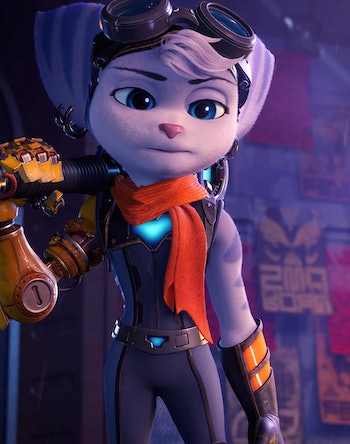 The past 365 days were an impressive showcase of inclusive gaming and software accessibility.

And even if 2021 wasn’t the most exciting year for game releases, that’s something to celebrate. A wide array of releases across genres prove how prioritizing accessible design early in development can yield incredible results. At both triple-A and indie studios alike, key advancements have been made that will define accessible gaming for years to come.

The fervor of The Game Awards has died down and the dust has settled, so let’s recap seven of the most accessible releases of the year. We’ll be ranking these in list format, but regardless of order, all these studios should be proud of the work they’ve done to ensure the gaming community continues to expand by putting inclusivity first.

7. The Vale: Shadow of the Crown

We’re kicking off our 2021 accessibility list with a game that is, in many ways, about the concept of accessibility. Available on PC and Xbox, The Vale lets players take control of Alexandra, a blind princess who’s forced to find her way back to her homeland once her caravan is attacked. The game conveys Alexandra’s disability by surrounding players in darkness, with only auditory cues and colored dots to guide you along your path. Along the way, you’ll engage in basic combat with powerful foes and traverse uncharted lands to reach your destination.

Made from a visually impaired perspective, The Vale might just be the single best game of 2021 for those facing visual difficulty. Its control scheme is simple, and even the color dots feature easily readable text that is also spoken aloud.

Sometimes the best accessibility pillars cater to those in need while educating those outside the disability community about what life with a debilitating medical condition is actually like. The Vale accomplishes both goals superbly.

Unpacking is a zen game based on the idea of taking objects out of cardboard boxes and organizing them across various rooms. Through these actions, players chart the course of a young woman at key points in her life. By arranging childhood bedrooms, shared apartments with challenging boyfriends, and first adult homes, Unpacking becomes an awesome tale about change, growth, and the circle of life — available to play on Xbox, Switch, and PC.

From an accessibility perspective, this simple concept works wonders. It’s streamlined enough that it can be played one-handed, and it supports a wide variety of control methods across all platforms. Prefer touch or gyro options? Buy the game on Nintendo Switch.

The game even adapts for cognitive disabilities as well, completely removing the light puzzle-solving mechanics with an “allow items anywhere” option. Unpacking is somewhat lacking in the visual accessibility sphere given that visuals are so essential to its core concept, but those with motor, cognitive, or moderate visual disabilities should have zero issues finishing this game.

Ubisoft’s recent approach to game design focuses on giving players a lot to do in its open worlds, and this philosophy translates to the accessibility suite found in Far Cry 6. There are tons of accessibility options in this game to serve the needs of people with visual, auditory, cognitive, and motor-based disabilities, but they can be overwhelming to wade through. Thankfully, presets based on the aforementioned categories do offer those playing with a disability a solid place to start.

Far Cry 6 does an impressive job of checking off the mainstays. Subtitles are easy to read and customizable, a voice narrator is turned on by default, and all of the game’s controls can be remapped and customized based on context. Want revised driving controls but like the default combat layout? It’s possible.

I also greatly appreciated the “hold to tap” setting that translates all long button holds to double taps. There’s even a “no-stick press” setting that allows your character to sprint at all times. Any element of the UI can be resized and recolored too. It is a little frustrating that so many of these helpful options are lost in menus and not integrated more organically into the game’s design, but Far Cry 6 still has a vast array of accessibility options nonetheless.

Like many of Ubisoft’s games, Far Cry 6 is available to play virtually anywhere: Xbox, PS5, PS4, PC, Stadia, and Luna.

Available on Xbox Series X|S, Xbox One, and PC, Halo Infinite is the year’s last major release. But it’s also one of the most accessible thanks to a mixture of in-game features and menu-based options. The menus feature customizable subtitles and fully remappable controls, as well as color changes for friendly and enemy players. If you use assistive software to speak, there is speech to text and text to speech to make communication easier online.

Beyond the sea of selections, Halo Infinite’s developers at 343 Industries use Halo’s sci-fi universe as a springboard to build in awesome accessibility features for everyone, especially in Infinite’s single-player campaign.

“Accessibility features don’t need to be locked behind a maze of menus.”

Press down on the D-pad, and you’ll activate a scan ability that highlights nearby intractable objects and points Master Chief toward waypoints. Key collectibles are highlighted brightly, and most even beep as you inch closer to them.

These thoughtful design elements demonstrate how thoughtful accessibility features don’t need to be locked behind a maze of menus, but can instead enhance the core gameplay loop and worldbuilding for all players.

I’ve always loved that Halo’s shooting reticle changes colors when pointed at an enemy, and that feature returns in offline and online modes alike. Despite some occasional navigational difficulty and the inability to resize its tiny UI, Halo Infinite remains a very accessible FPS.

3. Marvel’s Guardians of the Galaxy

Guardians of the Galaxy is one of the most recognizable brands in modern entertainment, so luckily its game developers at Eidos-Montréal made sure Marvel’s Guardians of the Galaxy was one of the most accessible games in 2021. Single-player narrative adventure games have lots of latitudes to be accessible, and this title makes full use of that designation. It features four base difficulty presets, each of which can be customized substantially. Players can increase or decrease damage taken and dealt, and decrease ability cooldown timers too.

Star-Lord’s visor just might be my favorite built-in accessibility option. It enables a high-contrast filter that makes objects in the environment easier to see, highlights nearby collectibles, and guides you to your next waypoint. When you know where you’re going and battle difficulty can be so heavily tuned, Marvel’s Guardians of the Galaxy becomes a very beatable game.

You can play Marvel’s Guardians of the Galaxy on PS5, PS4, Xbox, and Nintendo Switch via streaming.

Ratchet & Clank: Rift Apart made headlines soon after its release as one of the most accessible games of 2021, all despite being one of the PS5’s first true exclusives. Chief among its litany of innovations is the Game Speed slider, which allows players to physically slow down the game’s action when firefights or traversal necessitate quick reflexes. In the accessibility community, Rift Apart will always be remembered as the first high-profile game to release with that option.

Elsewhere, the game features four different difficulty levels, one of which makes players invincible. You can also make it impossible to fall off the map or enable a high-contrast filter too.

Having finished the game, one of my favorite features was the Simplified Traversal option that maps all traversal options to the circle button on a context-sensitive basis. This game does have wonky waypoints at times, but it’s nevertheless a testament to Sony Interactive's commitment to accessible software design.

In our view, Forza Horizon 5 on either PC or Xbox is 2021’s most accessible game. It’s rare that a title’s accessibility suite is tight enough to introduce a disabled player to genres they’ve almost never been able to play before. But that was the case for me when starting up the latest project from Microsoft’s Playground Games.

The game covers its accessibility basics and then some, with a total of nine different difficulty settings, high-contrast filters, customizable subtitles, resizable UI, remappable controls, screen readers, and a multitude of driving assists to keep motor-impaired drivers glued to the road at all times. There’s also a Game Speed option as well which, similar to Rift Apart, slows down the action of the game as much or as little as you want. For less serious hiccups, you can rewind mid-race to retry a particularly hairy turn.

That being said, the unrivaled accessibility of Forza Horizon 5 is only partly enhanced by its menus and is best understood in the design of the game itself. This is an experience that exudes accessibility — giving racers free rein to do whatever they want in its open world.

If you only feel comfortable playing a certain type of race, there’s plenty to enjoy without feeling pressured to drive outside your comfort zone. If you just want to do doughnuts and smash stuff up, you’ll be rewarded for that with an endless stack of skill points. Paired with its accessibility features under the hood, Forza Horizon 5 is a game that begs you to have fun any way you want. Even those who think they hate traditional car racing games should give it a shot. There’s no winning or losing here, just high-speed bliss.