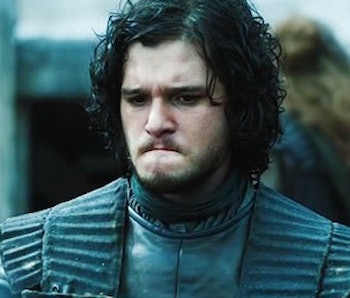 George R.R. Martin is hard at work on The Winds of Winter... so what else is new? The author of the books that inspired Game of Thrones recently said he won’t visit the set of HBO’s prequel show House of the Dragon until he’s finished writing the sixth book in the main series. But what if Martin never actually intends to finish Winds of Winter at all?

An intriguing new theory suggests that Martin might actually have signed a contract with HBO that blocks him from ever releasing Winds of Winter, and it actually makes a lot of sense. Here’s what you need to know.

Redditor u/goofmeisterr offers up this disturbing theory. The basic premise here is that if Martin does finish the main books and it reminds us how bad the show’s finale was, this could undercut enthusiasm for House of the Dragon and other future Game of Thrones spinoffs. So HBO might have cut him off preemptively.

“Imagine a world where GRRM was to release TWOW soon. And imagine it lives up to the quality of the previous books and readers are thrilled with it. Wouldn't this likely serve as a reminder for what could have been, and the bitterness that fans were left with on the original series' departure? Potentially deterring fans from watching Snow. Unless all of that is swept under the rug by prohibiting GRRM from dividing show and book canon?”

Okay so this might make sense in theory, but why would George R.R. Martin even sign a contract like the one described? Well, aside from the obvious answer of... money, there are a few other reasons we can think of.

Why this Winds of Winter theory makes sense

Specifically, there are two reasons why Martin might agree to a bizarre deal like this. The first one is simple: writer’s block. GRRM is clearly struggling to finish this book. After many years of delays, he may have jumped at the chance of giving up.

The other possible reason is a bit more nefarious. While Martin has made it clear that his suggestions were largely ignored during the final years of Game of Thrones production, he’s been heavily involved in House of the Dragon. He even suggested some changes to his own story that create a stronger connection between the two shows. Is it possible that Martin traded Winds of Winter for more control over House of the Dragon? It’s a stretch, but not impossible.

Ultimately, this is just a fun theory and you shouldn’t treat it as fact. That said, if this is correct, the question becomes: was it a fair trade? For anyone still holding out hope that Martin will finish Winds of Winter (and the seventh book after that) the answer is likely a resounding no.