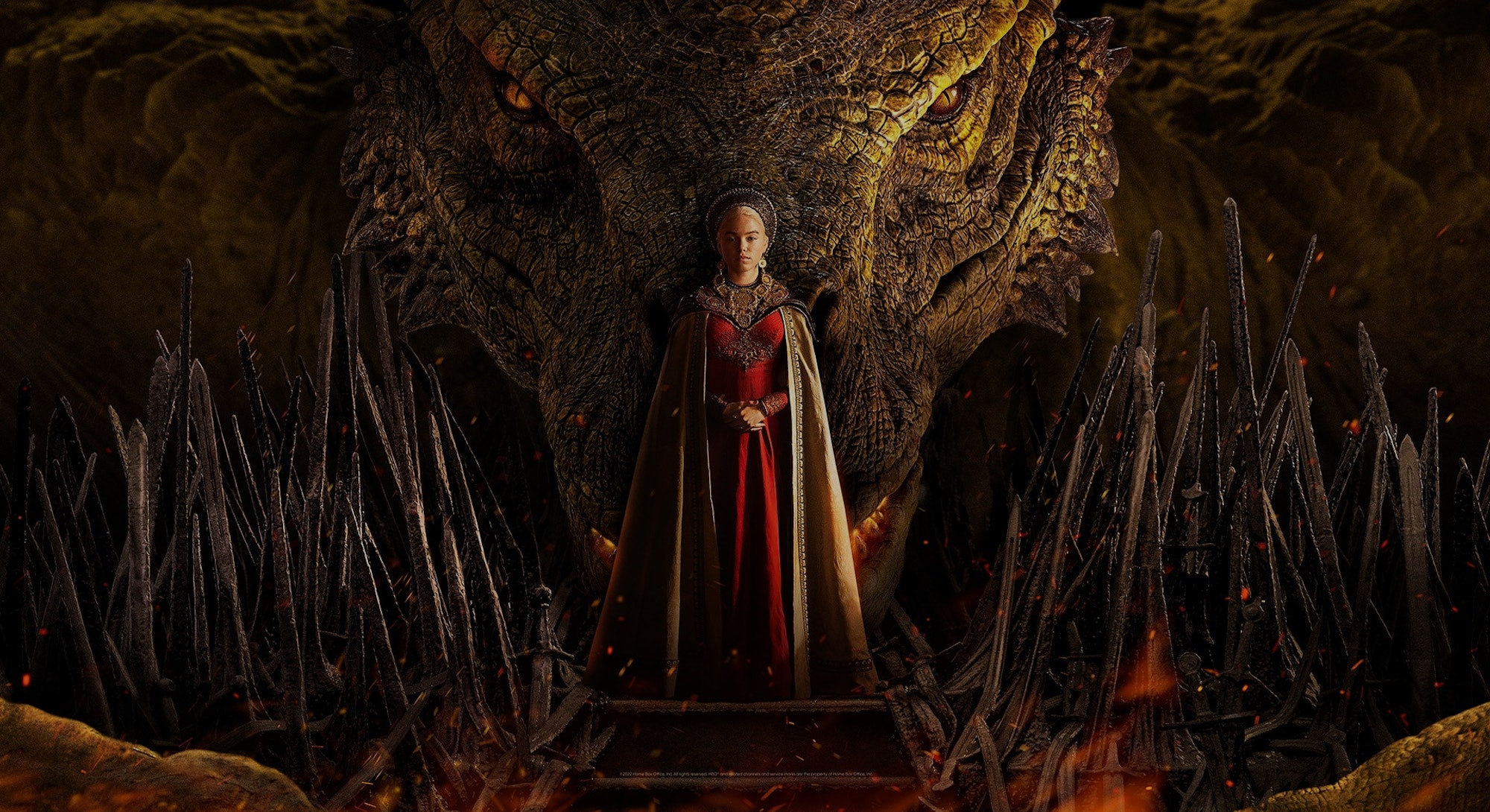 Cersei Lannister was the second woman ever to ascend the coveted Iron Throne.

So who was the first?

House of the Dragon, the much-anticipated prequel spinoff to Game of Thrones from series author George R.R. Martin, Hollywood screenwriter Ryan Condal, and GoT alum Miguel Sapochnik (who directed several classic episodes including “The Battle of the Bastards”), recounts the unions forged and terminated in House Targaryen roughly 200 years before Daenerys walks through fire to emerge as the Mother of Dragons.

Standing in for Daenerys here is Princess Rhaenyra Targaryen, played by both Milly Alcock and Emma D’Arcy (there’s a major time-jump in Episode 6, but more on that a bit later). As the daughter of the king, she’s enjoying her life at the top of the wheel until King’s Landing is thrown into chaos by the death of her brother. Left without a male heir, her father has no choice but to name Rhaenyra the future Protector of the Realm.

That is until two years later when a Targaryen prince is born, leading to a conflict known in Westeros history as the Dance of Dragons. Set against the backdrop of a Targaryen civil war, HBO’s House of the Dragon reveals how Dany’s ancestors used their dragons to achieve dominion over The Seven Kingdoms of Westeros, and how misogyny led to their ruination.

But House of the Dragon has Hodor-sized big boots to fill. So how does it compare to Game of Thrones? After watching six out of the inaugural season’s ten episodes, we can assure that most Game of Thrones fans, particularly those who were diehard loyalists of their Khaleesi, will relish their time back in this ferocious medieval-fantasy world. As for those viewers who have never heard of the Baratheons, the Martells, or the Greyjoys, House of the Dragon provides a solid stepping-stone for the eight-season tentpole show while holding its own as a separate, unique story. Both the similarities it shares with Game of Thrones and the differences that set it apart make House of the Dragon a genre prequel with a ton of potential — even if the first season feels rushed at times.

How House of the Dragon improves on Game of Thrones

The most obvious departure House of the Dragon makes from its predecessor is that it hones its political action on one family: the Targaryens. Say goodbye to memorizing 60 names at the jump! Farewell to having to meticulously follow along with every birth, death, and marriage across multiple families and generations, as was necessary with Game of Thrones.

House of the Dragons’ tighter focus means viewers don’t have to do as much homework to absorb the full scope of the political drama. The plight of the Starks is dearly missed, but the Targaryens — and, as Alicent Hightower cheekily puts it, their “queer customs” — provide viewers with more than enough spectacle to stay entertained.

Standouts include scene-stealer Milly Alcock, who plays the teenage version of Rhaenyra, and Emma D’Arcy, who comes in as late-20-something Rhaenyra. Both do a magnificent job handling the same protagonist with subtle intensity and nuance. Our princess is a haughty firecracker, yes, but she is also deeply insecure about her reception in King’s Landing — as both a girl and as someone grieving the loss of a mother and a friend.

Matt Smith is great (as always) as the detestable Prince Daemon Targaryen, but the series’ second scene-stealer is Paddy Considine, who plays King Viserys I Targaryen. Considine does a superb job of handling a complex character, making him simultaneously unlikeable and sympathetic. Viserys genuinely grieves his first wife, loves his second wife, loves his daughter, and isn’t an entirely unreasonable leader, either.

Just like in Game of Thrones, the CGI is absolutely breathtaking — frankly, a must if we’re going to see dragons every single episode. Along with the special effect, astounding prosthetics, makeup, and platinum-blonde wigs make this dark fairy tale easy to escape into.

But the biggest advantage House of the Dragon has over Game of Thrones is that most of the Targaryen history has already been documented by George R.R. Martin, not only in the A Song of Ice & Fire original books but also in his Fire & Blood historical prequels. With the source material complete and Martin back in the mix after being pushed aside in GoT’s final seasons, there are fewer chances for another tragedy

What House of the Dragon could have done better

Like Game of Thrones, House of the Dragon is neither perfect nor consistent. That doesn’t mean both HBO shows aren’t outstanding prestige fantasies, but they both have weak spots, too.

One aspect of Game of Thrones that is sorely missed in House of the Dragon is the original show’s sense of humor. There are no moments of witty banter between any of the characters, as they are too mired in familial conflict and political intrigue and dragon-raising to ever crack a joke. For some viewers, this may be okay, but for those who need to catch their breath from all of the seriousness, this isn’t your show.

The same goes for Game of Thrones fans who were most roused by the spooky and supernatural elements of the show, or fans most pumped by the elaborate, choreographed sword-fight (and training) scenes. Sure, House of the Dragon has dragons (duh), and an inexplicable Weirwood tree growing in The Keep, but there isn’t any magic, per se.

There are no Children of the Forest in sight. No Faceless Men. No White Walkers. (Not in the first six episodes, anyway.) Fights with the potential to be memorable are often cut short — it’s hard to win a battle when the other side has a dragon.

Of course, humor, mystery, and duels can all be easily added or improved upon in future seasons, should the show survive Warner Bros. and Discovery’s rocky union. But our third contention with House of the Dragon is a trickier fix.

Halfway through Season 1, House of the Dragon jumps forward by a decade. This makes for odd pacing as the HBO show skips to the juiciest bit of its source material (the two-year “Dance of the Dragons” civil war along with Rhaenyra’s six-month reign) rather fast.

Had this been billed as a limited series from the start, such a jump would have made more sense. As a multi-season series, we’re not so sure.

Will the war be stretched out and stretched thin as a result? If House of the Dragon aims to go beyond Rhaenyra’s story and cover the Targaryens up until the Mad King (Daenerys’ father), then forget we ever mentioned anything, but if it doesn’t... well, we hope the prequel doesn’t turn out to be a one-season wonder.

House of the Dragon blazes onto HBO this Sunday at 9 p.m.