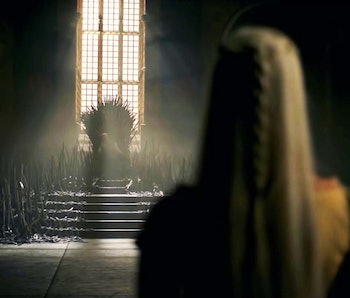 The first trailer for HBO’s House of the Dragon is full of new faces.

From Matt Smith’s Daemon Targaryen to Olivia Cooke’s Alicent Hightower, the teaser for the upcoming Game of Thrones prequel does plenty to introduce viewers to the series’ most important players.

And like Game of Thrones, House of the Dragon promises to feature a large cast of characters — many of whom will eventually end up on opposite sides of a devastating conflict known as “The Dance of the Dragons.”

Despite the trailer’s focus on setting up House of the Dragon’s various political conflicts, the teaser never explicitly states the identity of whoever’s sitting on the Iron Throne at the start of the series. But it’s important to know who the King of the Seven Kingdoms is when House of the Dragon begins — especially given the role he plays in helping ignite the Targaryen civil war that the series is set to explore.

The First of His Name — While the Iron Throne is featured heavily throughout the first House of the Dragon trailer, there are only a few shots of the man who occupies it — and none of his whole face. The king in question is none other than Viserys I Targaryen.

Played by Paddy Considine (The Outsider), Viserys is a notable figure in the history of Westeros, one who is viewed in a tragic light not because of anything that came to pass during his lifetime, but because of what happened after his rule came to an end.

The Young King — Considine’s Viserys is a pleasant man — one who maintains peace throughout Westeros during his reign as king. He’s the older brother of Matt Smith’s Daemon Targaryen and the father of Emma D'Arcy’s Rhaenyra Targaryen, maintaining an extremely close relationship with the latter. Rhaenyra is often seated by her father’s side during his various feasts and celebrations. One brief shot in the House of the Dragon trailer (see above) even appears to show D'Arcy’s Rhaenyra sitting next to Considine at some kind of celebration.

Viserys and Rhaenyra have such a strong relationship, in fact, that when he fails to produce a son (at least, one who survives infancy) with his first wife, Viserys names Rhaenyra his heir to the Iron Throne. In effect, this places Rhaenyra’s claim to the throne above Daemon’s, who otherwise would have become his brother’s royal successor. Despite that, Rhaenyra’s appointment is well-received throughout the Realm, thanks largely to how popular she is.

Viserys’ decision to name Rhaenyra his heir has devastating consequences, which first begin to brew when he marries his second wife, Alicent Hightower. A rivalry develops between Rhaenyra and Alicent (who is played by Olivia Cooke and seen brandishing a knife in the House of the Dragon trailer). Alicent wants one of her and Viserys’ sons to be named his heir instead of Rhaenyra, but her husband refuses to go back on his word.

This conflict is what, among other things, leads to the Dance of the Dragons. With Viserys’ aversion to conflict resulting in him failing to directly intervene in the rivalry between Rhaenyra and Alicent, the royal court begins to divide into two different sides: those who support Alicent (known as “the greens”) and those who support Rhaenyra (known as “the blacks”).

When Viserys eventually passes away, Alicent uses division within the court (which was made worse by her father, Otto Hightower), to stage a royal coup. She names her son, Aegon the Elder, the new ruler of Westeros instead of Rhaenyra, and it’s this event that essentially marks the beginning of the Dance of the Dragons.

The Inverse Analysis — The House of the Dragon trailer may not go out of its way to spotlight Paddy Considine’s Viserys, but that shouldn’t make you think he isn’t an important figure in the show’s story. In fact, many of the seeds of conflict that go on to bloom after his death are first sown while he’s alive.

Like Robert Baratheon in Game of Thrones, he’s a figure who looms large over everything in House of the Dragon.

House of the Dragon premieres on HBO Max in 2022.