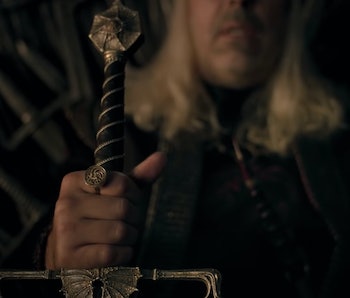 Over two years after Game of Thrones ended its eight-season run, HBO has finally given fans a teaser trailer for its first Thrones spinoff, House of the Dragon.

Set around 200 years before the events of Game of Thrones, House of the Dragon will tell the story of the infamous Targaryen civil war known as “The Dance of the Dragons.” With a massive ensemble cast and familiar medieval setting, the series promises to fill the violent, fantasy political thriller void that Thrones left open when it came to an end back in 2019.

Our First Look — Narrated by Matt Smith’s Daemon Targaryen (a name you’ll want to remember), the first trailer for House of the Dragon is very much a teaser. There aren’t any lines of dialogue outside of Smith’s central narration. The trailer’s visuals are comprised mainly of brief shots of the show’s various important figures as well as fleeting moments of violence and tension. The House Targaryen symbol is also all over the trailer, though there aren’t any (still-living) dragons anywhere in it.

Everything culminates, however, with a brief but exciting look at the show’s version of the Iron Throne. With melted swords lining the floor around the throne like a pit of spikes, it’s a strikingly different take on the throne than the one seen in Game of Thrones, but one that feels much more in line with author George R. R. Martin’s original design for it.

Dragons & Kings — In the books (and in Game of Thrones), the Iron Throne is said to have been built out of a thousand swords taken from Aegon the Conqueror’s enemies, which were melted down and forged together.

However, the version of the throne in Game of Thrones is far tidier than the one described in the books. As described by Martin himself, the throne is supposed to be a “hunched beast looming over the throne room, ugly and asymmetric,” with iron steps leading up to a seat that sits high above the ground.

While the Iron Throne in this House of the Dragon teaser doesn’t get the chair’s height quite right, the addition of the melted swords on the ground help give it the dangerous, messy, and ugly feeling that Martin intended it to have. On its own, it’s a relatively small design tweak, but one that helps put the Iron Throne in House of the Dragon at least a little more in line with Martin’s original vision than Game of Thrones’ version.

With that in mind, it’ll be interesting to see how — and if — House of the Dragon ultimately gives a reason for why its version of the Iron Throne looks so different than the one in Game of Thrones. Will the upcoming series feature a scene where the swords around the throne are removed or destroyed? Or will it simply allow this difference between it and Thrones to exist without explanation?

The Inverse Analysis — Coming off Game of Thrones’ lackluster, critically-panned final season, it seems safe to say that fans will likely be approaching House of the Dragon with a healthy degree of trepidation.

Taking that into account, this is an effective (if lean) teaser — one that reintroduces viewers to the world of Game of Thrones all while setting up its core cast and time period. Thanks to its new take on the Iron Throne, House of the Dragon also finds a way to carve out its own visual identity effectively.

Whether or not that means the show will be able to deliver a satisfying narrative experience (that Thrones ultimately failed to) remains to be seen.

House of the Dragon will premiere on HBO Max in 2022.