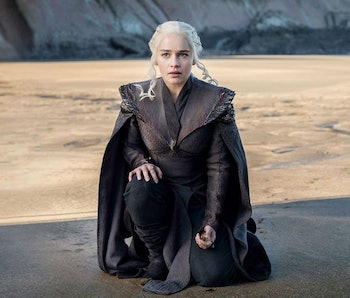 HBO is on the verge of releasing its first Game of Thrones spinoff, House of the Dragon, this week. However, while anticipation for the TV series seems to be high, it’s decidedly not the Game of Thrones-related title that fans want the most. That title, of course, goes to The Winds of Winter, the long-awaited sixth installment of author George R. R. Martin’s A Song of Ice and Fire book series, which inspired Game of Thrones.

Fans have been waiting for over a decade for The Winds of Winter to hit the shelves of their local bookstores. Unfortunately, it sounds like Martin still doesn’t know when readers will get to experience his follow-up to 2011’s A Dance with Dragons.

The Update — In a recent interview with Vanity Fair for House of the Dragon, George R. R. Martin admitted that he is no longer interested in predicting when The Winds of Winter will be completed. “I’m making progress, but I’ve given up on any hope of predicting the end,” Martin said. “Every time I do, I don’t make it and everybody gets mad at me, and there’s no sense. It’ll be done when it’s done.”

The author did note in the same interview that he has made considerable progress on The Winds of Winter over the past two years, largely due to the isolation the past few years have forced on him and the rest of the world. “The two years of enforced isolation enabled me to get a lot more writing done, because I was doing a lot less traveling and public appearances and speeches and all of that stuff,” the author said.

However, while Martin still seems optimistic about the progress he’s making on The Winds of Winter, this update is undoubtedly not the one that fans hoped to hear this week.

The Long Wait — Martin has, of course, kept busy over the past 11 years by not only spending time promoting Game of Thrones and House of the Dragon, but also by writing supplemental materials for his Song of Ice and Fire book series. In 2018, Martin even released Fire & Blood, a fictional history of the Targaryen family, which now serves as the primary source material for House of the Dragon.

That said, Martin has not released a new installment in the Song of Ice and Fire series since A Dance with Dragons. That means fans have been waiting 11 years for Martin to finish the series’ sixth installment. Based on Martin’s most recent comments, as well as the pace of the publishing industry, it doesn’t sound like The Winds of Winter will be released at any point this year, either.

In other words, while fans of Martin’s most well-known fictional world can look forward to shows like House of the Dragon inviting them back in the forthcoming months and years, it doesn’t sound like The Winds of Winter will be released anytime soon. That’s undeniably disappointing, especially considering how long fans have already had to wait for the novel.

The Inverse Analysis — What’s interesting about the discussion surrounding The Winds of Winter is that, rather than quashing all anticipation for it, Game of Thrones’ ending in 2019 seems to have had the opposite effect.

Now, fans want to read both The Winds of Winter and its intended follow-up, A Dream of Spring, not only to find out the conclusion to Martin’s ongoing series, but also because they want to see if the author can deliver a more satisfying ending to his story than Thrones did. Unfortunately, it sounds like fans may still have a while to wait before they find out the answer to that question.