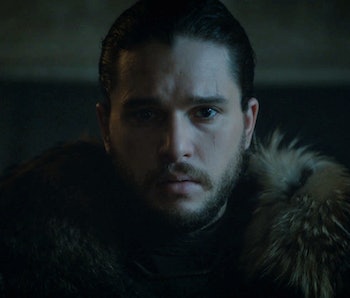 It’s been nearly three years since Game of Thrones aired its divisive series finale, but fans are still waiting to read the final installments in the Song of Ice and Fire book series that inspired the HBO drama. The series’ fifth and most recent installment, A Dance with Dragons, was released over 10 years ago in July of 2011. Ever since then, fans have been eagerly waiting for author George R. R. Martin to finish writing the series’ penultimate chapter, The Winds of Winter.

What Happened — In a new post on his website, Not A Blog, George R. R. Martin told Game of Thrones fans that he is still hard at work on writing The Winds of Winter. However, the writer admitted he made “less” progress on The Winds of Winter in 2021 than in 2020. Martin did note that “‘less’ is not ‘none,’” and even finished the blog post by writing, “Let me say one [sic] again, yes, I am still working on Winds of Winter.”

Throughout the rest of the post, Martin gave some exciting and optimistic updates on a number of the other Westeros-set projects in development right now, including the highly anticipated Game of Thrones spin-offs, House of the Dragon and 10,000 Ships. But despite the post’s mostly cheery and optimistic tone, the Winds of Winter updates provided throughout it are undoubtedly not what most Song of Ice and Fire fans wanted to hear.

The Long Night Continues — Song of Ice and Fire fans have been eagerly awaiting The Winds of Winter since A Dance with Dragons was released in 2011. However, the anticipation surrounding the book’s release has only increased in the time since Game of Thrones came to an end.

The final two seasons of Game of Thrones were largely seen by both critics and fans alike as disappointing final chapters for the HBO series, and its series finale was received poorly by almost everyone who watched it. As a result, many devoted Song of Ice and Fire fans are looking to Martin to provide them with the satisfying ending to his story that Game of Thrones didn’t.

Unfortunately, Martin has stopped predicting when he’ll finish The Winds of Winter. His newest update about the book doesn’t suggest that fans should look forward to it appearing on the shelves of their local bookstores anytime soon either.

The Inverse Analysis — At this point, it’s impossible to guess when George R. R. Martin will finish The Winds of Winter. Of course, with so many different Game of Thrones spin-offs in the works right now at HBO, it’s not like fans of Martin’s fantasy epic will be starving for new Song of Ice and Fire-related material in the coming years.

The problem is that The Winds of Winter is easily the project that Martin’s readers want to get their hands on the most, making its uncertain future all the more frustrating for fans everywhere.

More like this
Entertainment
Jan. 30, 2023
New House of the Dragon “making-of” book plunges into the fantasy hit’s creation
By Jeff Spry
Culture
Feb. 5, 2023
Peter Jackson’s Most Unnecessary Movie Fixed the Biggest Problem with The Hobbit
By Ryan Britt
Culture
Feb. 1, 2023
If The Last of Us Made You Bawl Your Eyes Out, You Need to Revisit This Zombie Rom-Com
By Mónica Marie Zorrilla
LEARN SOMETHING NEW EVERY DAY.
Related Tags
Share: