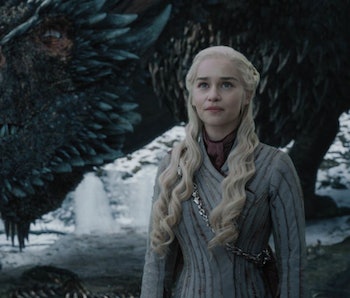 The Winds of Winter may be closer than it’s ever been before. That will undoubtedly come as good news to the Game of Thrones fans who have been waiting 10 years for the novel, which will be the sixth installment in George R. R. Martin’s A Song of Ice and Fire series. The highly-anticipated sequel has been delayed countless times over the years, as Martin has struggled with writing it.

Now, it looks like the author has finally made some real progress on The Winds of Winter.

The News — In his latest blog post, Martin revealed that he wrote “hundreds and hundreds of pages” of The Winds of Winter in 2020 — noting that it was one of the few good things about last year, which he also described as “probably the worst year I have ever lived through.” Martin said that, as a whole, 2020 was the best year he’s had with Winds of Winter since he began writing it.

The author did go on to note that he still has “hundreds of more pages” to write before he can bring the novel to what he calls a “satisfactory conclusion.” Martin also added that he hopes finishing the novel is “what 2021 is for.”

What This Means — The wait for The Winds of Winter has always been difficult for fans, but it's become even more frustrating in the time since Game of Thrones came to an end. The HBO show’s final season was largely derided by viewers and critics, many of whom felt the adaptation failed to bring Martin’s epic story to a fitting conclusion. As a result, fans have been even more eager than usual to see how Martin himself will end the story.

With that in mind, Martin’s update here is an exciting one. Knowing that he wrote several hundred pages of The Winds of Winter in 2020 means that the author may be in the final stretch of writing the book. If that really is the case, and Martin does manage to finish it this year, then Game of Thrones fans could conceivably expect to see The Winds of Winter released sometime in 2022.

(For context, that'd mean there was an 11-year gap between the release of The Winds of Winter and its predecessor, A Dance with Dragons, which came out back in 2011.)

The Inverse Analysis — In the same blog post where he shared the Winds of Winter update, Martin was quick to say that he wouldn’t be offering any release date predictions for the novel. However, Martin did say that he is “hopeful” about finishing The Winds of Winter, which could indicate that the novel’s completion is, finally, within his reach.

Of course, all that depends on if Martin can continue to make the same kind of progress this year that he did in 2020. After all, The Winds of Winter isn’t the only Game of Thrones project that he's involved with right now, as the author is also helping with HBO’s Thrones prequel, House of the Dragon, as well as a number of other rumored Thrones spin-offs.

Only time will tell if Martin can manage to continue his work on The Winds of Winter while balancing the needs of those other projects at the same time.