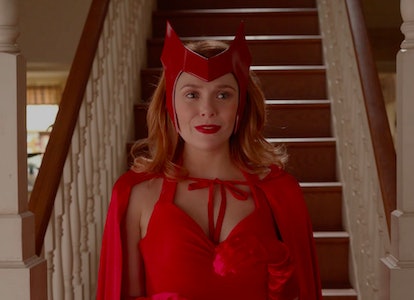 WandaVision is weaving a complex mystery. The Marvel Disney+ series has taken its time across its first three episodes, dolling out only a handful of clues amid the show’s avalanche of otherwise goofy gags and old sitcom homages. The ending of WandaVision’s third episode marked a clear turning point for the series though, and fans are having an understandably tough time waiting to see how this week’s WandaVision episode picks up where its predecessor left off.

With that in mind, here’s everything you need to know about WandaVision episode 4’s release date, start time, plot, and more.

When is the WandaVision Episode 4 release date?

When is the WandaVision episode 4 release time?

How long is WandaVision Episode 4?

As of now, it’s unclear how long WandaVision episode 4 will be. The show’s first three episodes all hovered around 30 minutes, with episode 2 clocking in as the longest at 37 minutes (counting end credits).

Given the runtimes of the previous WandaVision installments, it’d be reasonable to assume that episode 4 would also run close to 30 minutes. However, the final moments of Episode 3 marked a narrative shift for the series, and Kevin Feige has previously said that the lengths of the show’s following episodes would all “start to vary more.” So don’t be surprised if WandaVision Episode 4 ends up being the show’s longest to date.

Where to watch WandaVision Episode 4

WandaVision streams exclusively on Disney+ — meaning only the service’s paid subscribers will be able to watch Episode 4 when it debuts this Friday. WandaVision’s previous three episodes are also available exclusively on the streaming service.

What is the WandaVision Episode 4 plot about?

As a result of how secretive Marvel and Disney have been — and continue to be — about WandaVision, not much is known about Episode 4’s plot right now.

Elizabeth Olsen has gone on record to say that the episode is “quite a shift” and will feature a “fun perspective swap.” While that could mean any number of things, Episode 3’s ending suggests that the “perspective swap” Olsen is talking about is in reference to Teyonah Parris’ Monica Rambeau. It's likely that WandaVision Episode 4 will give viewers quite a bit of new information about the character, including how she ended up in Westview in the first place, and possibly, what she's going to do now that she's outside of it again.

Is there a WandaVision Episode 4 trailer?

There is no official trailer for WandaVision episode 4 (yet). Unfortunately, Disney has avoided releasing weekly trailers for its ongoing Disney+ series, and the studio has continued that pattern with WandaVision. That means fans are going to have to keep watching the previously released WandaVision trailers and featurettes (like the ones below) if they want to see footage from the show's future episodes.