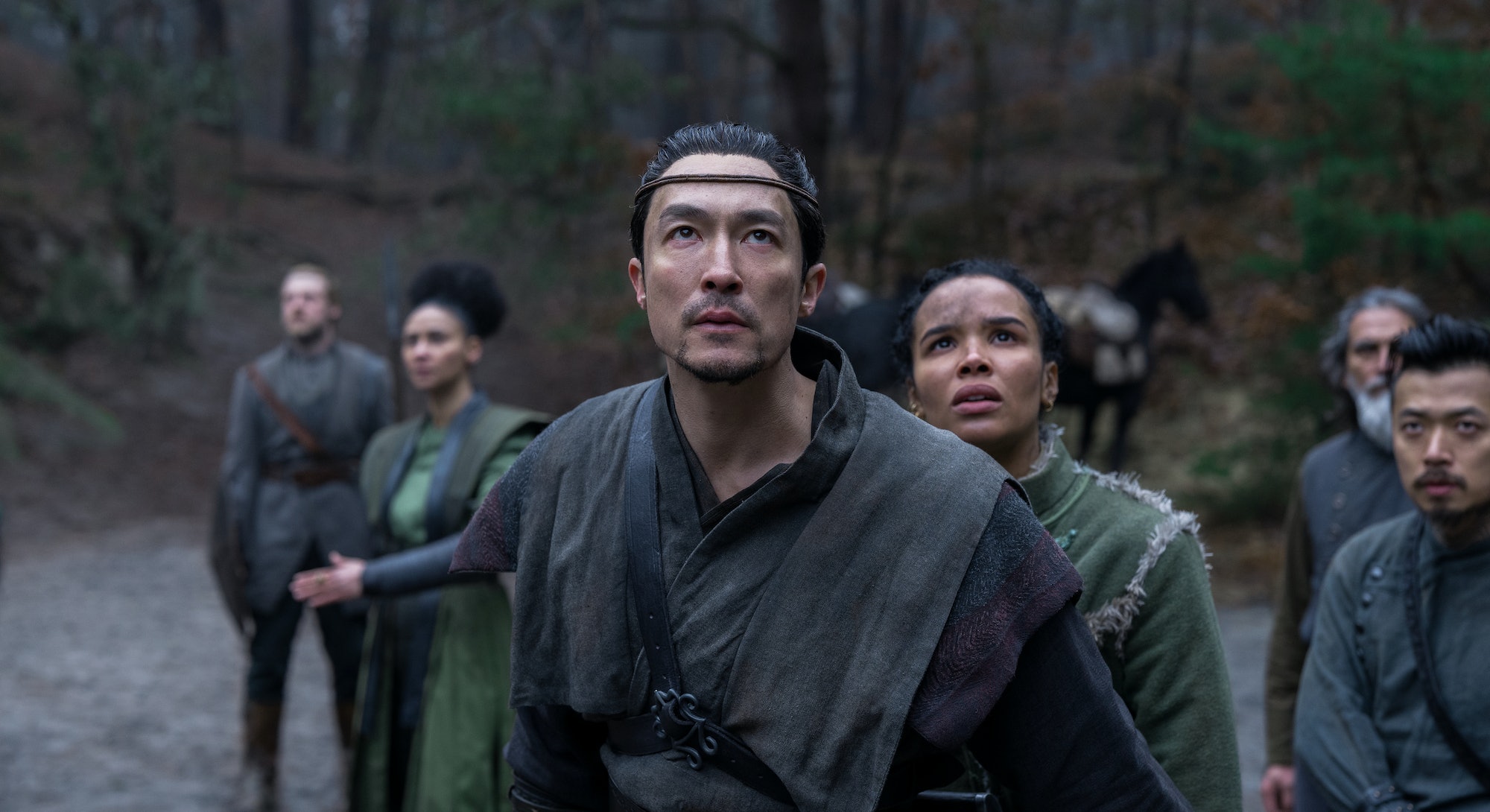 When you go to the Eye of the World, and you are not the Dragon Reborn, you will meet your demise.

That’s what the heroes of The Wheel of Time were warned in the first season of one of 2021’s biggest television epics.

Based on author Robert Jordan’s best-selling fantasy novels, the story broadly tells the journey of five villagers who embark on a harrowing journey in which only one of them is the prophetic “Dragon Reborn.” This chosen one will be capable of stopping a grave threat from ending the world. On December 24, 2021, The Wheel of Time aired its first season finale, a mixed bag of exciting highs and confusing lows.

We’ll tread lightly on spoilers, but with The Wheel of Time’s first season in the rearview and Season 2 assured, it’s not too early to consider what might lie ahead.

Prior to the show’s November 2021 premiere, Inverse spoke to stars Daniel Henney, as al’Lan “Lan” Mandragoran, and Zoe Robins (“Nynaeve al’Meara”). They gave a glimpse of Season 2, which had already begun production when Season 1 started streaming on Amazon Prime Video.

What’s in store for Wheel of Time Season 2?

Fans of The Wheel of Time books know that Lan, the bodyguard of Moiraine Damodred (Rosamund Pike), begins a relationship with Nynaeve. The series delivers on that story, with Lan and Nynaeve becoming an item in the second half of the season.

But being so close to the finale, there was little time for romance. In fact, Lan puts the kibosh on their relationship in Season 1’s final episode. “I will hate the man you choose because he is not me,” Lan tells Nynaeve in the warm glow of the morning sun.

But surely, their separation can’t last long, which both Henney and Robins hint at to Inverse.

“I don't know how much I can reveal, but Zoe and I have amazing chemistry together,” Daniel Henney tells Inverse. “We're really enjoying working together. I couldn't ask for a better partner in terms of the love [story]line. We're excited about where that's gonna go.”

“Our screen adaptation is quite different,” Zoe Robins tells Inverse. “It's quite a feat to bring these very dense books to life. We explore a lot of different dynamics that I don't think we get to see much in the books. There's more depth brought to screen, which is beautiful.”

The Season 1 finale ends with a brief “fake out” for Nynaeve when she’s burned by magic at Tarwin’s Gap. The show initially seems to take down Nynaeve unexpectedly — reminiscent of Ned Stark in Game of Thrones’ first season.

But with her healing magic, Egwene (Madeleine Madden) saves Nynaeve. But while Nynaeve may have healed, Robins says she isn’t without her scars when Season 2 begins.

“I think what you can expect for everyone is a lot more trauma, emotionally and physically,” Robins tells Inverse. “She keeps growing and expanding. We learn more about her, and she's put to the test emotionally. We see her battle with a lot of her own insecurities, and she learns to face herself more. She comes to grips with what her destiny is.”

Robins adds, “I think we see more of her vulnerability, which is a lovely trait of hers. People often overlook it when they first read Nynaeve as a character in the book.”

As for Lan, Daniel Henney says there will be more between himself and Rosamund Pike’s Moiraine.

“I think you're going to see him have to ask some very difficult questions of himself, where he belongs in the world,” Henney teases. “His dynamic with Moiraine is a focal point of the first few episodes. You’re going to see a side of him we haven't seen yet in Season 1. It’s an exciting journey for him.”

A Boy with No Home

Like his character Lan, Daniel Henney has lived a nomadic life. Born in Michigan to a Korean mother and an American father of British descent, Henney zig-zagged across South Korea, Hong Kong, and Taiwan in his career as a model while acting in off-Broadway shows in New York.

In that way, Henney really knows Lan. “He’s kind of a boy with no home,” Henney says. “He’s been on this journey to find a semblance of home. His bond with Moiraine represents that. He’s her protector, guardian, friend, and confidant. He’s very loyal and task-oriented.”

While fans of the show might want to “ship” Lan and Moiraine, Henney thinks their relationship is platonic.

“It’s a different kind of love,” Henney says. “It’s non-sexual. But I think it’s interesting to present this new idea of what love can be. [Their] bond is really incredible. That’s something I talked to [Rosamund Pike] about in the beginning, wanting to showcase this new idea of love.”

In The Wheel of Time universe, Lan is a “Warder,” a unique class of warriors often chosen by Aes Sedai (like Moiraine) as their bodyguard and protector. Warders are stylistically and philosophically reminiscent of Japanese samurai, and it matters that the show cast Henney in the role of a Warder like Lan.

“I’m proud to wield the sword for the Asian American crowd.”

In his chance to represent the Asian community in a big fantasy production like The Wheel of Time, Henney doesn’t take it for granted.

“It means a lot,” he says. “Asian representation is important for me. [But] in choosing Wheel of Time, it didn’t cross my mind until it started to become real. As a kid growing up in rural Michigan, playing games as kids, playing kings and queens, I did feel like the outcast for being the only Asian kid. As I started acting, I never thought it would be possible for me to play a king. It’s a point of pride for me.”

Adds Henney, “I’m proud to wield the sword, no pun intended, for the Asian American crowd. And hopefully, I represent them strongly.”

A Bee in Her Bonnet

Robins says both the intensity of stunts and the use of rubber monsters in Power Rangers prepared her for The Wheel of Time.

“Before both productions, we had a stunt boot camp, if you will. We were put to the test to see how much we could handle,” Robins recalls.

“For Wheel of Time, they try and make it as practical as possible. For many of the creatures you see on screen, we were actually working with people in prosthetics or suits on the day,” Robins says. “That just helps my processes as an actor. You don't have to use your imagination as much when you've got the living, breathing thing in front of you.”

“Nynaeve proves to be quite divisive.”

As Nynaeve (a complicated name Robins admits she “said it wrong” in her audition), the actor inhabits the role of a healer and protector known as a “Wisdom.” But as the youngest Wisdom, Nynaeve has “a kind of bee in her bonnet.”

“She’s been undermined her whole Wisdom career. She’s had people be condescending towards her. She's definitely felt like she's had something to prove for a long time,” Robins says. “I think that's something a lot of us can kind of relate to, wanting to prove that you are actually good at what you do.”

A survey of The Wheel of Time fandom shows Nynaeve is among the saga’s most popular characters, a responsibility Robins didn’t take lightly.

“I researched a lot about her online to get fans’ takes on what they thought,” she says. “Nynaeve proves to be quite divisive. In a lot of people’s first reads, they hate her. But as they grow older, with more reads [of the books], they understand why she is the way she is and what makes her so interesting.”

Robins’ research consisted of Wheel of Time YouTubers, namely Daniel Greene (“He does amazing episodes”) and the Wheel of Time Wiki. The only thing Robins didn’t dive into much was the book series.

“At some point, I decided to put it down and focus on the scripts we had. Because I found I was getting confused with where I was in the books versus where we were in filming. I prefer to stick with the present moment.”

The present may be pleasant, but as anyone knows, the wheel of time keeps on turning.

The Wheel of Time Season 1 is streaming now on Amazon Prime Video.