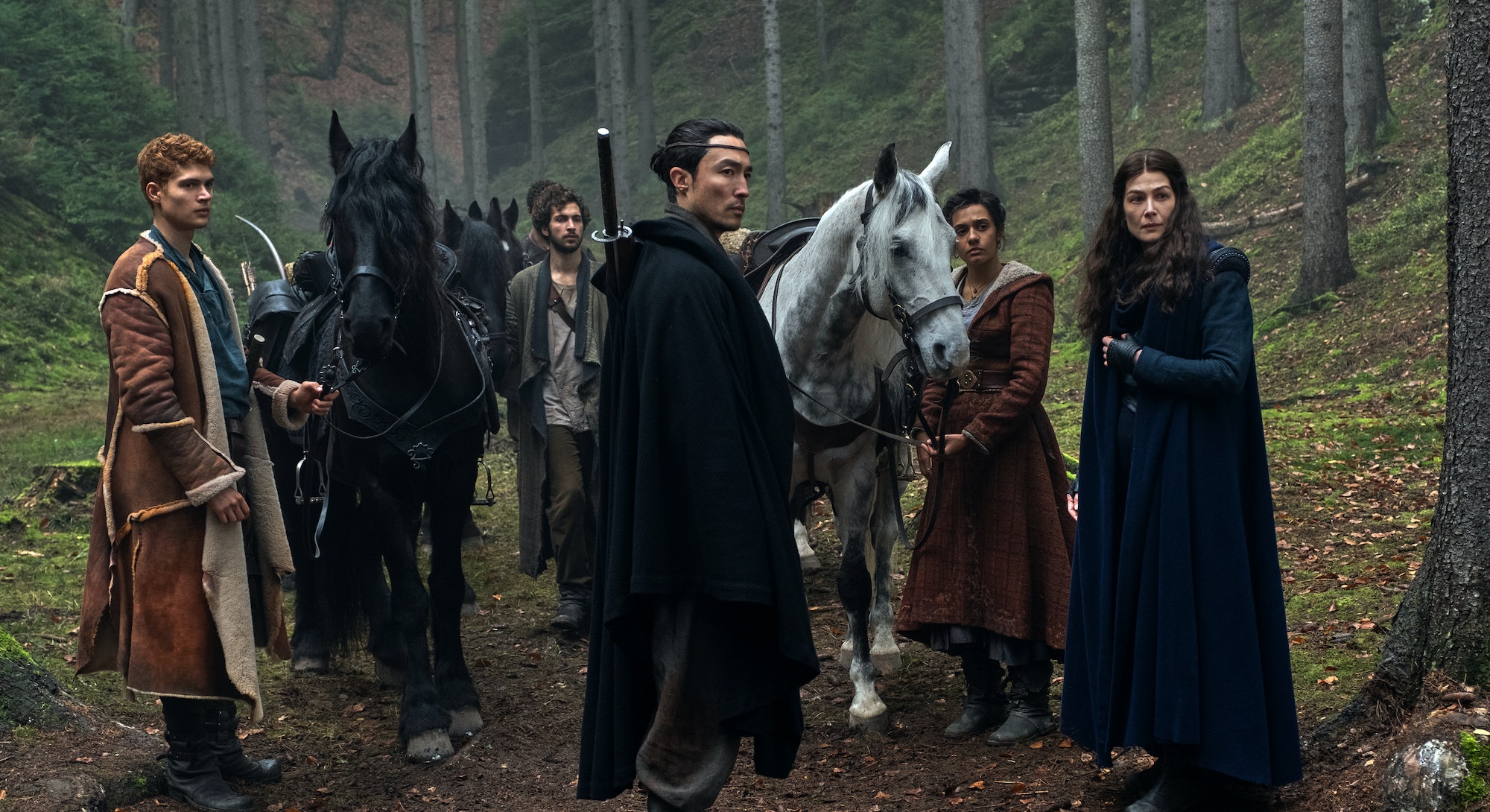 The Wheel of Time’s showrunner knows a thing or two about survival.

Before his career as a writer for shows like Chuck, Marvel’s Agents of S.H.I.E.L.D., and the upcoming film adaptation of the Uncharted video games, Rafe Judkins endured 38 days as a contestant on the eleventh season of the CBS show Survivor. It was an experience that stayed with Judkins even during his comparatively comfy but no less daunting task as the showrunner of The Wheel of Time, Amazon’s newest big-budget bet in the streaming wars.

Remembering those hot, sweltering days voting off rivals in Guatemala, Judkins advised his Wheel of Time cast — an ensemble of mostly young people on a long, perilous journey through the unknown wilderness — to become attached to things their characters had with them.

“These characters are on this journey into a world they don’t know or understand,” Judkins tells Inverse, revealing similarities between fantasy heroes and contestants of a game show.

“I’d be like, ‘You need to spend time with this horse, or this bedroll.’ Every little thing you have matters. Our actors spent a lot of time with the stuff they carried, trying to give this sense of authenticity to them, being in the world with only what they’re carrying on their backs.”

On November 19, Amazon will heat up the streaming wars with a big-budget live-action adaptation of The Wheel of Time, based on the epic (and epically long) fantasy book series by the late Robert Jordan. In a nutshell, the story follows a group of young people who may or may not have amongst them the “Dragon Reborn,” the reincarnation of a great hero who can fight an evil force known as “The Dark One.” They are aided by Moiraine, a powerful mystic (played in the show by Emmy-winner Rosamund Pike), and her bodyguard Lan (Daniel Henney).

Often mentioned in the same breath as other sword and sorcery stories like Lord of the Rings and Game of Thrones, The Wheel of Time stands out with its focus on young people on a journey of self-discovery. It’s for that reason, several attempts at adapting the book series to film and TV have been made for over 20 years; in 2015, a low-budget pilot with no publicity aired at midnight on cable channel FXX.

Between 2017 and 2018, the pieces finally fell in place for The Wheel of Time with Sony and Amazon. Producer Mike Weber, whose other credits include the Jumanji reboot films, says it took other books to successfully adapt to TV to prove Wheel of Time was worth the shot.

“It was very challenging trying to get it off the ground,” Weber tells Inverse. “It wasn’t until the intersection of Game of Thrones hitting its popularity, Handmaid’s Tale coming out, and most importantly, Rafe Judkins identifying what was great about the books and being able to condense that into a succinct presentation for streamers.”

Weber says Judkins’ vision could appeal to hardcore readers and newcomers alike. “It came together at once at the right time,” he adds.

That doesn’t mean the job was easy. It was incredibly daunting for Judkins, an experienced TV writer whose first-ever capacity as showrunner is for The Wheel of Time.

“I was lucky enough to have a ton of television production experience a lot of TV writers don’t today,” he says, “I was thankful for every minute. Because Wheel of Time, it’s a gigantic undertaking.”

Whenever things got too complicated — and they surely do, when translating a 14-book saga to screens — Judkins found himself glued to his collection of worn-out, dog-eared copies of Jordan’s books. (He first encountered the series through the first book, 1990’s The Eye of the World, from his Mormon mother as a child in Utah.)

“I've now physically broken three copies of the first three books,” Judkins says, “I always go back into them, scribbling notes. Anytime I'm running into trouble, if things are daunting and expectations are weighing heavily, I go back and read. I go back to the books and to the characters and make sure we’re delivering on that.”

But changes inevitably have to be made. He promises that there are surprises even book readers won’t expect. “We haven't done them for shock value or because we felt like we needed to change the books,” he says, “but changes needed to be made to make the adaptation work.”

There were also practical reasons why the show can’t tell the same journey that’s on the page. “We can’t do season-to-book because our actors would be in their fifties,” Judkins jokes.

“What I’m trying to do more than anything is adapt the whole series. The first season feels like the spine of the first book with, hopefully, the feeling of the entire series instead of just the first book.”

“It’s pretty much season-per-book is the plan,” says series producer Marigo Kehoe, producer of costume dramas like Outlander (another popular book series made into a successful television show) and The Crown for Netflix. “It doesn’t mean we’re going to [adapt] book-by-book. There are elements of the story we’re going to have to weave between books.”

One thing The Wheel of Time is faithfully adhering to is Jordan’s original tone. While the books have plenty of violence, romance, and even hair-raising scares — “There's big horror elements in the books, and that’s what we follow,” says Kehoe — the producers aren’t trying to mimic Game of Thrones and its cranked-up volume for gore and nudity.

“Our adaptation is very true to the source,” says Weber. “The source material was never salacious. There was never objectification of women that Game of Thrones was, in my opinion, guilty of. Our violence is not gratuitous. It’s intense, but it’s in service of character and the plot.”

The Wheel Keeps Spinning: The Wheel of Time Season 2

Though the show has yet to premiere, work on the next season is already underway.

“Season 2 is moving into the second and third books,” Judkins confirms. “We see these characters go off on their own journeys more. You get a deepening of the emotional arcs of these characters. When you get to the end of the first season, you're like, ‘What do they do from here?’”

In 2005, Judkins was on an island beach in Guatemala. Now, he’s navigating different terrain as the shepherd of a saga beloved by anyone lucky enough to flip through its pages. It’s not easy, and fans will not gracefully accept all of his decisions. But Judkins says he’s fortunate to have a strong and, thankfully, complete foundation to work from.

“I'm lucky I have these books. I know what we do from here,” he says. “If that’s your fallback, you’re gonna make it through. These characters are strong. They can stand up to it.”

The Wheel of Time premieres on November 19 on Amazon Prime Video.