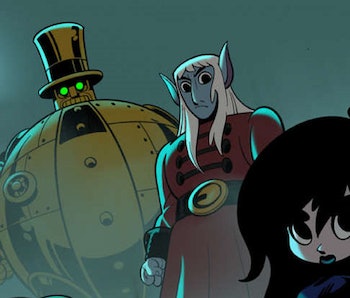 Samurai Jack creator Genndy Tartakovsky is back with a new animated series called Unicorn: Warriors Eternal. Tartakovsky has been producing animated originals for Cartoon Network for years, starting with 1995’s Dexter’s Laboratory. Since then, he has worked on Primal, Star Wars: The Clone Wars, and the Hotel Transylvania movies. The creator is now expanding his horizons, teaming with Cartoon Network and HBO Max to produce his latest series.

While Tartakovsky’s animation was only just announced, here’s everything we know about Unicorn: Warriors Eternal, including its release date, cast, plot, and poster.

Unicorn: Warriors Eternal will focus on ancient, powerful beings inspired by myths from around the world. In a statement, Tartakovsky elaborated on the project:

“Twenty-five years ago Dexter’s Laboratory was Cartoon Network’s first original series. It launched an incredible creative relationship that continued to prosper throughout the years. Today, I am so proud and honored to be able to create an animated series for HBO Max and Cartoon Network, and start a new relationship, fostering more bold and original storytelling. Unicorn: Warriors Eternal is going to be crazy cool and I can’t wait for people to see it.”

The series is one of several ordered at HBO Max, which is set to include a line-up of programming for kids.

When is the release date for Unicorn: Warriors Eternal?

A release date has not yet been confirmed since the animated series is still in production. Depending on how many episodes there will be and how long it will take to write and animate the show, Unicorn: Warriors Eternal could premiere on HBO Max by late 2021 at the earliest.

Is there a trailer for Unicorn: Warriors Eternal?

Not yet because the series is still being produced. The trailer will most likely be released a few months ahead of the series’ release date. While we wait on a trailer, HBO Max has revealed a first-look poster that includes the unicorns themselves, giving us a taste of what to expect from the supernatural series. Check it out below!

What is the plot of Unicorn: Warriors Eternal?

The animated series will follow a group of supernatural entities, ancient heroes based on an amalgamation of global legends, who return to Earth to fight a dangerous threat. Of course, their efforts are slightly thwarted when they find themselves reincarnated into the bodies of teenagers with their powers weakened and no memory of their original unicorn state. The heroes must contend with the emotional baggage that comes with being pubescent humans while attempting to fight a potentially world-ending menace. The struggle and the teen angst will surely feel all too real.

Who is in the cast of Unicorn: Warriors Eternal?

The voice cast has not been announced yet. However, fans should expect casting news to follow in the months leading up to the first season’s premiere date. Tartakovsky’s Samurai Jack and Hotel Transylvania had some big-name actors to voice the characters and we should expect Unicorn: Warriors Eternal to follow in the same path.