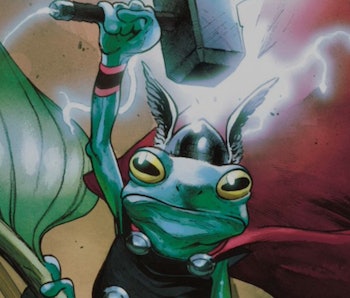 Taika Waititi is one of the most eccentric and singular filmmakers ever to work in the Marvel Cinematic Universe.

His unique sense of humor and visual eye shone through every scene of 2017’s Thor: Ragnarok. And by all indications, his sensibilities will bbe even more present and palpable across his long-awaited Ragnarok follow-up, Thor: Love and Thunder.

The film, set to hit theaters next year, promises to be even bigger and wilder than its predecessor. Thanks to this year’s Loki and Spider-Man: No Way Home, it seems likely that Waititi will have the infinite possibilities of a wide-open, fracturing multiverse available to use however he sees fit in Love and Thunder. That includes the chance to introduce and showcase multiple different versions of characters like, say, Thor.

And we already know the God of Thunder variant we’d most like to see him include.

Ribbit, Ribbit — Rumors have been circulating for months that Thor: Love and Thunder will feature versions of the God of Thunder from different, alternate universes. Some of those theories were born out of the confirmation that the film will feature Natalie Portman’s Jane Foster transforming into The Mighty Thor, while others stemmed from the role Gorr the God Butcher (Christian Bale) — a literally god-killing multiversal comics villain — is said to play in the film.

However, regardless of their origins, all of those Love and Thunder theories have only been strengthened (and accelerated) in the months since the Loki Season 1 finale concluded with the creation of a new multiverse within the MCU. And who’s been right at the center of some of those said theories? None other than Throg.

Step Aside, Hemsworth — In the comics, Throg is exactly what his name suggests: a frog version of the God of Thunder. Bestowed with the powers of Thor after lifting a splinter of Mjolnir, Throg is one of the silliest creations in the history of Marvel Comics, made even sillier by the fact that his version of Mjolnir is named — you guessed it — Frogjolnir.

However, the sheer absurdity of the character is also what makes him great. And given everything we know about Waititi’s love of the absurd, it’s hard to imagine he’d pass up the opportunity to use Throg on-screen. That’s assuming, of course, he’s been given the chance to do exactly that in Thor: Love and Thunder; the introduction of the multiverse in the MCU certainly seems like all the creative permission he’d need to include Throg.

Early rumors about the film suggest it will see Chris Hemsworth’s God of Thunder in desperate need of help in his fight against Gorr the God Butcher — and that he’ll be given that in the form of other versions of himself, arriving at the last minute from alternate universes. Though unconfirmed, it’s hard to protest just how exciting of an idea that really is, especially if one of the film’s variants ends up being Throg.

Thanks to Loki Season 1, we already know that versions of Throg exist within the multiverse. So all Thor: Love and Thunder needs to do, really, is give the character more time in the spotlight than Loki did.

The Inverse Analysis — There’s no way of knowing what directions Waititi and Marvel are planning to go in with Thor: Love and Thunder. But if the film does end up embracing its multiversal potential as much as some fans believe it will, there’s no reason to think that a Throg appearance is off the table. Frankly, it seems like far too entertaining a possibility for Marvel to pass up.

Both WandaVision and Loki received acclaim earlier this year, proving that not only can the MCU get weird but that it benefits from doing so. Indeed, Marvel’s growing acceptance of the zanier side of its comics is paying off in spades for the studio. And it’s hard to think of a decision more emblematic of the studio embracing its silliness than giving Throg a legitimate role in Thor: Love and Thunder.