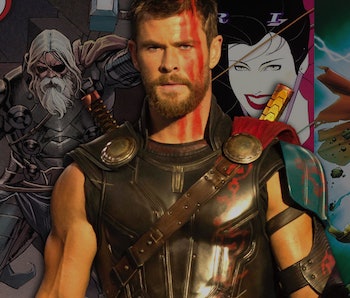 The apocalypse is upon Asgard, but that doesn’t mean Thor: Ragnarok isn’t fun. The third installment of Marvel’s Thor trilogy and the 17th Marvel Studios film overall is an intergalactic action-comedy romp that has the God of Thunder, Thor (Chris Hemsworth), step up against Hela (Cate Blanchett), the Goddess of Death, in a showdown of the ages.

And it’s not just Thor and Hela who are in the spotlight, either. Also along for the ride is fellow Avenger the Hulk (Mark Ruffalo), who has become a space gladiator for the Grandmaster (Jeff Goldblum) since he went MIA at the end of 2015’s Avengers: Age of Ultron.

Taking place inside the wide-open Marvel Cinematic Universe, the Taika Waititi-directed Thor: Ragnarok is loaded with Easter eggs and comic book references that die-hard fans always eat up. As the movie enters theaters this weekend, here is a brief rundown of all the most obvious callbacks to Marvel lore, as well as other homages to movies, music, and pop culture.

First, there was that time Loki turned Thor into a frog…

An early joke in Thor: Ragnarok is when Thor mentions how Loki once turned him into a frog. It’s more than just a memory of a young Loki messing with his bulky brother. It’s actually a reference to Throg, wielder of the mighty Frogjolnir, a Thor/frog hybrid who first appeared in Thor #364 in 1986. Fun fact: Throg was also a founding member of the Pet Avengers, formed by the Inhuman good boy Lockjaw.

2. The Contest of Champions

Originally introduced in the three-issue miniseries Marvel Super Hero Contest of Champions in 1982, Marvel revived the concept in 2015 for its mobile app, Marvel Contest of Champions, which also had its own tie-in comic written by Al Ewing. While the new comic ended its run in 2016, the game is still live and receives regular updates from its developer studio Kabam.

At one point, the Grandmaster introduces Tessa Thompson’s tough-as-nails Valkyrie as “Scrapper 142.” That’s a reference to The Incredible Hulk #142, written by Roy Thomas and published in 1971, which featured the introduction of Valkyrie. Kind of. It’s a long story but trust us, “Scrapper 142” is a homage to Valkyrie’s Marvel debut.

When Thor enters the Contest of Champions, he’s introduced as “astonishingly savage.” Those two words have some significance in Marvel canon.

“Astonishing,” besides belonging to the X-Men (from Joss Whedon no less), also references Tales to Astonish, one of the original Marvel anthology comics that introduced characters like the Hulk, Namor the Sub-Mariner, and Ant-Man. And,, yeah, the movie Ant-Man previously referenced Tales to Astonish as well.

Meanwhile, “Savage” is a clear homage to Savage Hulk, a more recent comic book series from 2014, the namesake of which is a more powered-up, or more animalistic, form of the Hulk.

Tony Stark’s nickname for Thor, “Point Brreak” — the title of the 1991 action movie starring Patrick Swayze, who has luscious blonde hair like Thor — is referenced again as Thor’s password to access the Avengers Quinjet.

Back in 2011, Kenneth Branagh’s Thor laid the groundwork for Thanos by featuring a right-hand Infinity Gauntlet in Odin’s vault. But Thanos has his own left-hand gauntlet (as seen in the post credits of Avengers: Age of Ultron), and there really should only be one. Thanks to Hela, we now know that Odin’s gauntlet was a fake.

On the tower that houses the Grandmaster’s treasured champion, the Hulk, the heads of previously unseen Marvel characters like Ares, Man-Thing, and Beta-Ray Bill serve as stone busts carved on the tower. It seems that there were other champions in the Grandmasters’s game before Bruce Banner came along.

It’s hard to say which part of Thor: Ragnarok specifically pays pays homag to to the legendary Jack Kirby, as Kirby’s influence is everywhere throughout the whole movie (Walt Simonson’s, too). But the box seats where the Grandmaster and Loki watch the Contest of Champions is a rather prominent example of Kirby’s vision coming to life.

The New York nursing home that Loki sent his father Odin to, Shady Acres, shares its name with the nursing homes in South Park and Ace Ventura: Pet Detective. Not for nothing, but South Park just released its own blockbuster superhero game, South Park: The Fractured But Whole, last month.

Beware, here be spoilers. Towards the end of the film, Thor begins looking more and more like Old King Thor, as envisioned by Jason Aaron in 2013’s Thor: God of Thunder. While the MCU’s Thor doesn’t exactly look like Odin — no long white hair or beard — Thor now has only one eye (from his fight with Hela), and he does have proper rule as the new King of Asgard.

11. He Stood Alone at Gjallerbru

Though it was teased in the trailer so it’s not really an Easter egg, Skurge’s triumphant moment where he saves Asgard and redeems himself comes directly from the comics. You can learn more about that scene here.

12. A Land of Pure Imagination

It’s tough to hear it over the Grandmaster’s booming voice, but when Thor is strapped on a chair learning all about the Grandmaster’s planet of Sakaar, the melody of “Pure Imagination” from 1971’s Willy Wonka and the Chocolate Factory plays while Thor is all creeped out. Worth noting that the original distributor of the first Thor movie, Paramount, also owns the rights to Willy Wonka.

This was also teased in a previous promotional video for Thor: Ragnarok, but at one point, Thor suggests his impromptu team — where he’s allied with Hulk, Valkyrie, and Loki — should be named the “Revengers.” That awful name is a deep-cut reference to the Revengers, which you can also learn about here.

14. Odin and the Phoenix

In the comics, there’s an unexplored history between Odin and the Phoenix Force, the same cosmic spirit that gave Jean Grey her destructive powers in X-Men. Very recently, in Generations: The Unworthy Thor & The Mighty Thor #1, Odin and the Phoenix discuss their history, where Odin, somehow, was actually the Phoenix’s lover. Try not to think about it too much.

Anyway, in Ragnarok, when Odin finally enters his eternal rest, his essence looks like golden dust that forms the rough shape of a phoenix before disappearing into the atmosphere.

More like a case of foreshadowing than an Easter egg, Tony Stark’s casual shirt that Bruce Banner changes into in the Quinjet is a t-shirt of the 1982 Duran Duran album Rio, which among its singles includes the monster hit “Hungry Like the Wolf.” Guess what happens later in the movie?