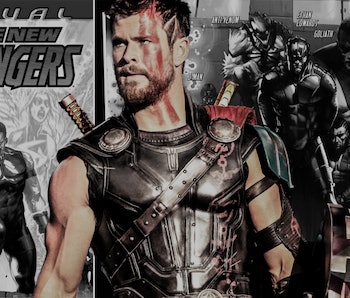 When Thor fumbles while thinking of a name for his new superhero team in a new Thor: Ragnarok trailer, it’s more than just a joke. “The Revengers,” shout-out is actually a pretty obscure Easter egg, as it’s the name of a D-list superhero team in the Marvel Comics Universe.

On September 29, Marvel Studios released a brief clip on Twitter of Thor (Chris Hemsworth) coining a new name for his makeshift team, consisting of himself, Hulk, Valkyrie, and Loki. “It’s called the Revengers,” he mumbles to Valkyrie.

While the name is obviously just a riff on the more famous “Avengers,” the name “Revengers” has some roots in the comics. The term first popped up in issue #12 of Tom DeFalco’s A-Next, a series about the next generation of Avengers. Their evil rival team styled themselves as “The Revengers,” founded by the supervillain Red Queen, who was actually Hope Pym, the daughter of Ant-Man.

But all that A-Next business happened in an alternate reality. It wasn’t until 2011 when in the pages of Brian Michael Bendis’s New Avengers #1 that the Revengers showed up in the main Marvel canon. Wonder Man — who was furious at the Avengers, believing they did more harm than good in the world — formed his own team of obscure D-list heroes, the Revengers, to strike back at the Avengers.

And when we mean obscure, we really mean obscure. See if you know any of these so-called heroes of the Revengers: Atlas, Captain Ultra, Century, Anti-Venom, Demolition Man, Goliath, Devil-Slayer. Any of them ring a bell? If they don’t, don’t worry, because the Revengers didn’t last very long.

See the clip of Thor name-dropping this team below.