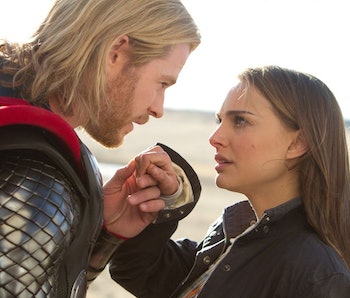 Thor: Love and Thunder is bringing back Jane Foster. Played by Natalie Portman, the character hasn’t had a substantial role in a Marvel Cinematic Universe film since 2013’s Thor: The Dark World. Given the way Thor: Ragnarok totally reinvented Chris Hemsworth’s God of Thunder and the Thor franchise as a whole, many believed for a long time that Jane wouldn’t ever be a major presence in the MCU again.

However, that’s not the case. Jane will play an important and surprising role in next year’s Thor: Love and Thunder. A new behind-the-scenes look at the film suggests that Love and Thunder won’t just bring back the character but will also retroactively fill in some of the gaps in Jane’s story that have only been alluded to previously.

The Leaks — Twitter user @NaberriePower has shared some new set photos from Thor: Love and Thunder online, which were taken while additional scenes for the film were recently shot in Los Angeles.

The set photos don’t reveal much but do prominently feature Natalie Portman and Chris Hemsworth, both of whom can be seen wearing costumes and wigs that look extremely similar to how the pair looked in Thor: The Dark World. As a result, many believe the set photos may have been taken while the two actors were filming a flashback scene together.

A Mutual Dumping — It’s impossible to know with absolute certainty what the context is of the scenes that Hemsworth and Portman were filming in these set photos. That said, the fact that they both seem to have donned looks very similar to their Thor: The Dark World hairstyles and outfits suggests the scene likely takes place sometime between the end of that 2013 film and the start of Thor: Ragnarok.

As for what moment the scene may depict, the most obvious and likely answer is that it’ll be Jane and Thor’s breakup. Up to this point, their split has only been passingly alluded to in previous MCU movies — namely, Thor: Ragnarok. That 2017 film, notably, sees a couple of fans telling Thor they’re “sorry to hear” that Jane dumped him — prompting Hemsworth’s God of Thunder to tell Loki (Tom Hiddleston), “She didn’t dump me, you know? I dumped her. It was a mutual dumping.”

On its own, the interaction works as a quick and humorous way to explain Jane’s absence in Thor: Ragnarok. However, with the character set to return and transform into The Mighty Thor in Thor: Love and Thunder, it seems more likely than not the upcoming film will finally show us Jane and Thor’s split. With that in mind, it seems safe to say that’s probably the focus of the flashback scene Hemsworth and Portman were spotted filming together in these set photos.

The Inverse Analysis — Considering how long it’s been since moviegoers spent some time with Jane, Thor: Love and Thunder will have to dedicate some of its runtime to explaining what she has been up to in the years since Thor: The Dark World. That means the film will likely contain a handful of brief flashback scenes, including one of her and Thor’s post-Dark World breakup.

At least, that’s one of the only reasons we can imagine Natalie Portman and Chris Hemsworth sharing a flashback scene in Thor: Love and Thunder.