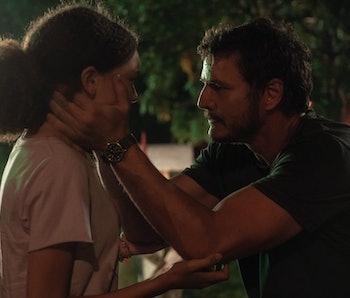 A lingering mystery from the original Last of Us game was finally answered by the acclaimed HBO adaptation, and in the first episode, no less.

In a blink-and-you’ll-miss-it visual detail, one of the franchise’s most enduring pieces of iconography — Joel’s wristwatch — gets the backstory fans have speculated about since the game was released in 2013. The HBO series not only canonizes a popular fan theory, but also deepens the character of hardened survivor Joel (Pedro Pascal), who may be more sentimental than he’s willing to let on. Minor spoilers ahead.

In the original game, Joel wears a broken field watch on a nylon green strap. In the prologue, Joel’s daughter Sarah fixes the watch as a birthday present in a brand new addition to the story.

Hours later, the apocalypse begins, and Joel and Sarah make a desperate escape. They’re later stopped by a soldier, who receives a chilling order to shoot them on the spot. Joel survives the encounter, but Sarah does not. After a lengthy time jump, Joel lives alone amid oppressive restrictions. His watch, now with a visibly shattered face, is again broken.

Since the game’s release, fans have asked how Joel’s watch broke for a second time. They have theorized time and time again that it happened when Sarah died. Not only were they shot at, but they had a rough fall down a rocky hill, which could have easily shattered the watch.

In the game, Joel’s watch wasn’t broken when Sarah died. For years, this fueled speculation that Joel’s watch was shattered in an offscreen event during the years between the prologue and the game’s primary plot. However, when the game was remastered last year for the PlayStation 5, Joel’s watch is broken during Sarah’s death. Maybe that was the intention of developer Naughty Dog all along, but technical limitations or simple oversight prevented them from filling in this detail. Now, the live-action series clearly makes this canon.

The first 30 minutes of the TV show recreates the game’s prologue nearly beat for beat, and it confirms that Joel’s watch broke when Joel and Sarah rolled down the hill. Look closely at Joel’s wrist when Sarah dies and you can see the watch is now cracked like it is for most of the game.

Why Joel keeps his watch in The Last of Us

Having a functional watch is useful when you’re fighting for survival, but Joel keeps his broken watch despite its inability to do the single thing it’s made to do. This speaks to the character’s pain outweighing his practicality.

Clearly, Joel misses his daughter. He’s trying to keep her close no matter how much time passes, and when Ellie (Bella Ramsey) points out the obvious to Joel, it foreshadows their eventual bond. Neither of the games made a big fuss over Joel’s watch, and it’s unlikely the show will either. But when it comes to understanding Joel and his relationship with Ellie, it provides a telling detail in a drama obsessed with getting all the little things right.

The Last of Us airs Sundays on HBO.