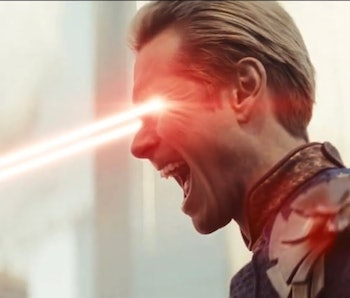 The Boys Season 2 ended with a cliffhanger that put several characters’ fates in jeopardy, including Black Noir. The mysterious character remained undefeated throughout Season 2, and it seemed inevitable that his storyline would eventually turn to more accurately reflect that of his comic book counterpart. While that hasn't happened yet, a clever theory puts a twist on the disturbing connection between Homelander and Black Noir and how it could still happen in Season 3.

Spoilers ahead for Season 2 of The Boys.

Black Noir is the silent and deadly member of the Seven. He proved to be Vought's most valuable asset in Season 2, sleuthing and spying on the other members of the team. Black Noir even seemed invincible in battle. That is, until Queen Maeve used his nut allergy against him and fed him an Almond Joy that ultimately sent him into a coma. While the character is currently out of the picture, he’s still very much alive and is expected to return much sooner than we think in Season 3.

In the comics, Black Noir is a clone of Homelander. He was created as a backup to kill the diabolical supe if he ever went rogue and became too powerful for Vought to control. Black Noir commits plenty of crimes to frame Homelander. When the latter finds out what his clone did, he goes berserk and the two fight before Black Noir kills Homelander. Of course, Black Noir is not Homelander’s clone in The Boys (as far as we know anyway), but Season 3 could still work in that reveal.

Reddit user SaladFront suggests that the real Black Noir will remain in a coma during Season 3. However, Vought will replace the real Black Noir with a cloned version of Homelander. Black Noir 2.0 could then commit “unspeakable acts of horror” to please Stan Edgar and ultimately overthrow Homelander as leader of the Seven. The theorist believes that only Maeve and Starlight will realize that something is going on with Black Noir and investigate.

It would certainly keep to the comic book’s original storyline and bring back Black Noir to the show in one fell swoop. Considering that his face is always covered, no one would know that he’s an entirely different person beneath the mask. Homelander is extremely vulnerable right now — Stormfront is out of commission, his son is gone, and Maeve successfully blackmailed him. It’s possible that Stan will want a more competent leader of the Seven moving forward and his answer to that is to bring in a new version of Homelander.

The Inverse Analysis — The theory incorporates Black Noir's comic book connection to Homelander without ignoring what happened to the character in Season 2 of the Amazon series. It's likely that the events of his battle with Maeve will change him forever. He could either come back differently after nearly dying or Vought could just clone Homelander instead. To the public, Black Noir will remain unchanged, but his cloning will likely create some turmoil within the Seven. Either way, we probably haven't seen the last of Black Noir in any form.