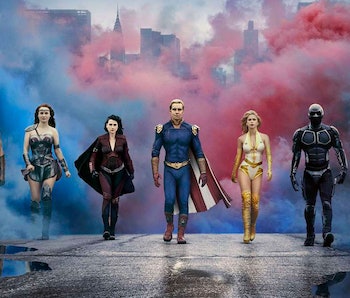 The Boys was renewed for Season 3 before Season 2 even premiered. Amazon was so confident in the diabolical series, which subverts expectations of what superheroes can be, that it also greenlit a spinoff show about Vought's superhero college. Season 2 of The Boys ended with multiple cliffhangers that set up Season 3 in a big way and changed some characters for good.

Here is everything we know about Season 3 of The Boys, including a release date, plot, cast, and when we might get the first trailer.

When is The Boys Season 3 release date?

The wait is soon to be over! Showrunner Eric Kripke announced on Twitter that Season 3 of The Boys would be arriving on June 3, 2022. Filming for Season 3 took place from February to September 2021.

What is the plot of The Boys Season 3?

Season 2 left many of the characters and the state of Vought in a precarious place. Multiple heads exploded during a congressional hearing, but the big twist was that congresswoman Victoria Neuman was actually a secret Supe with telekinetic powers. At the end of Season 2, Hughie starts working with said head exploder while the Seven crumbled. Black Noir was also taken down by a nut allergy, and Maeve threatened to expose Homelander's secrets to the world. It was all very intense.

Season 3 will undoubtedly pick up where Season 2 left off. The trajectory of the show is a little unclear at this point. Stormfront is still technically alive, but Homelander's son Ryan used his heat vision to slice off her limbs, leaving her muttering in German. Moving forward, Butcher will have to decide if he wants to take responsibility for Ryan (which is what Becca would have wanted) or let the government take the kid. Meanwhile, the rest of the Boys can finally come out of that basement where they've been hiding since the end of Season 1.

Who is in the cast of The Boys Season 3?

As for Stormfront, she's not technically dead, but whether she shows up in The Boys Season 3 remains to be seen. Here's Eric Kripke confirming to TV Line that she's definitely alive, at the very least:

"No, she’s not dead! She’s Stumpfront! She’s a stumpy little Nazi. She’s actually not dead. What we thought was interesting is, if you remember, she ages very, very slowly. So the best poetic ending for that character is someone who so believed in some kind of pure race finds herself mutilated and having to live with it for potentially centuries felt like a fate worse than death for her. So no, Stumpfront is not dead. Hashtag Stumpfront lives!"

“When I was a child, I had a crazy, impossible dream — to provide Jensen Ackles with gainful employment. I’m happy to say that dream has come true. Jensen is an amazing actor, an even better person, smells like warm chocolate chip cookies, and I consider him a brother. As Soldier Boy, the very first Superhero, he’ll bring so much humor, pathos, and danger to the role. I can’t wait to be on set with him again, and bring a bit of Supernatural to The Boys.”

Is there a trailer yet for The Boys Season 3?

No, not yet. A trailer will drop closer to the season's release date. However, fans of The Boys got a taste of new material when the "Vought News Network" released a video in December 2021 that included an "inspiring" speech from Homelander. You can check it out below.

This article was originally published on Oct. 15, 2020