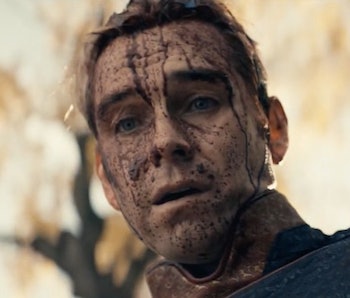 Homelander may be losing control in The Boys Season 2, but the leader of The Seven is still dangerous and seemingly indestructible. As a byproduct of Compound V, the substance that gives him and other Supes their powers, Homelander has super strength, heat vision, and can withstand explosions without injury. He’s pretty much Superman, but there's no Kryptonite equivalent to serve as his weakness. With near invulnerable powers and an uncontrollable temper, Homelander’s defeat seems impossible. However, The Boys comics may hold the key to how Homelander could die on the show.

Spoilers ahead for The Boys Season 2 and comics.

How do you kill the unkillable? The Boys has attempted to answer that question since Season 1. The protagonists have only managed to kill Translucent so far, but it took a lot of time and research to get it done because the Supe was invisible and bulletproof. If that wasn’t hard enough, Homelander has ten times the power of Translucent and no apparent weaknesses.

It’s actually Black Noir who kills Homelander. The two duke it out during brutal and ruthless battle at the White House that sees Homelander kill the president. Black Noir murders his rival and leaves only his arms and chest as proof of his existence. It's all very disturbing and gruesome.

As it turns out, the only reason Black Noir is able to kill Homelander is because he’s his clone. Developed by Vought to spy on The Seven’s leader, Black Noir is basically the company’s secret weapon to ensure that Homelander can be killed, should he step too far out of line.

Homelander was angry when he found out that Black Noir was his clone and that he’d been framing Homelander for his crimes. Black Noir also admitted to raping and killing Becca, Butcher’s wife, while pretending to be Homelander. It’s a massive twist and one that could play out in The Boys Season 2.

On the show, Black Noir is mysterious and we know next to nothing about him. We’ve watched him kill without remorse, but he hasn’t said a word thus far and his costume hides his face completely. Without knowing his identity, it’s hard to gauge what Black Noir’s feelings are or what he thinks about Vought and the other members of The Seven.

Early on in Season 2, however, Black Noir looks into Homelander’s recent activity and discovers that he’s been visiting Becca and her son Ryan. It’s unclear what he’ll do with that information, but it seems obvious that The Boys is starting to tap into the idea of Black Noir as a spy for Vought. Whether or not the series will ever reveal Black Noir’s identity remains to be seen, but the potential repercussions of this twist will surely be as bloody and diabolical as Homelander.

More like this
Entertainment
6.23.2022 7:00 AM
The Boys Season 3 Episode 6 release date, time, plot, cast, and trailer for “Herogasm”
By Jeff Spry
Entertainment
6.24.2022 11:15 AM
Behind the scenes at “Herogasm,” The Boys’ most NSFW episode ever
By Aaron Pruner and Jake Kleinman
Entertainment
7.1.2022 9:02 PM
Stranger Things Season 4 ending explained: How the emotional final episode foretells Season 5
By Mónica Marie Zorrilla
Related Tags
Share: