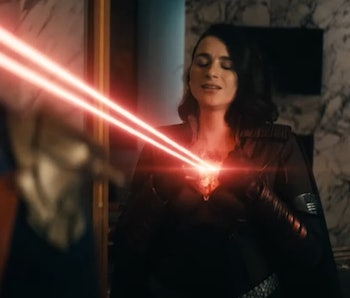 Homelander is losing his grip in The Boys Season 2. He’s unraveling at the seams in a desperate attempt to regain some control, and the person ruffling his feathers the most is Stormfront, the newest member of the Seven, who seems to know exactly which buttons to press on Amazon's superhero satire series.

It’s possible Vought hopes to push Homelander out as the Seven’s leader and replace him with Stormfront instead. In addition to that undertaking, a brazen new theory offers a rather disturbing twist on Stormfront’s identity and it could potentially reshape her relationship with Homelander.

Warning! Spoilers ahead if you're not caught up on The Boys Season 2.

In the Season 2 episode “Nothing Like It in the World,” it was revealed that Stormfront used to go by the name of Liberty, who vanished in 1979 after committing a hate crime (or so we thought). It’s possible she rebranded her identity and changed her Supe name to avoid being linked to Liberty, whose powers seem to include a slower aging process. Either way, the new information confirmed that Stormfront has always been racist and violent, but it’s possible there was another reason for her disappearance from the public eye.

Reddit user sinburger suggests that Stormfront is Homelander’s biological mother. Homelander’s age certainly fits the bill and it would also explain (at least in part) why she’s singled him out of the Seven. We know that Vought engineered Compound V, a substance that gives Supes their powers, and started injecting babies with it. Plus, Homelander knows nothing about his real parents since he was raised in a lab and given a fictional backstory for promotional purposes.

To take it a step further, it’s possible Stormfront/Liberty volunteered to give birth to Homelander for Vought. It wouldn’t be surprising considering her blatant racism and push for white supremacy. Perhaps she gave Homelander up to Vought immediately after he was born or offered up her DNA so they could make a test tube baby. It’s all rather disturbing, but that’s The Boys’ specialty.

In the comics, Stormfront was created by and fought for the Nazis. He pushed their ideology, but it was Vought that cloned him and added more Compound V into his DNA to ultimately create Homelander. Stormfront and Homelander are essentially two sides of the same coin.

Similar to the cloning process, it’s possible the Amazon series adjusted Stormfront’s backstory to fit the gender-bent hero (though DNA extraction is better than Stormfront actually giving birth to Homelander). It would also explain why she’s back with Vought after so long. The only “mother” figure Homelander ever knew was Madelyn Stillwell, but they had a twisted sexual component to their relationship. We can only hope that won’t be the case between him and Stormfront.

The Inverse Analysis — The theory makes a lot of sense, even though it doesn’t explain why Stormfront was gone for three decades. Conversely, she may have taken on another identity in the interim before returning to Vought full-time. Regardless, when you factor in the comics it makes for a solid theory. If correct, we’ll likely see Homelander react to the news of Stormfront being his mother, and there’s no doubt that it will change their already strained relationship for better or worse.

More like this
Entertainment
6.24.2022 11:15 AM
Behind the scenes at “Herogasm,” The Boys’ most NSFW episode ever
By Aaron Pruner and Jake Kleinman
Entertainment
6.28.2022 12:00 PM
Westworld Season 4 theory may reveal a shocking Dolores twist
By Mónica Marie Zorrilla
Entertainment
16 hours ago
Ms. Marvel Episode 5 flashback reveals the MCU's changed attitude to real history
By Dais Johnston
Related Tags
Share: