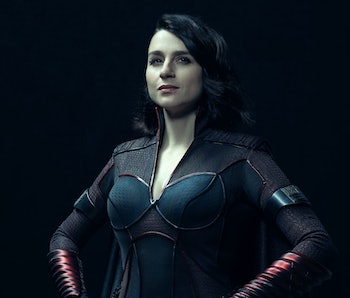 A storm is brewing. The Boys returned with a major new addition to the Seven, the corporate-controlled team of superheroes, in Season 2. Stormfront makes a disturbing first impression — she’s conniving, diabolical, and enjoys ruffling Homelander’s feathers. Though everyone on the squad can be terrifying and awful in their own way, Stormfront is the most openly racist and bigoted. A persuasive fan theory goes a long way toward explaining why.

Spoilers ahead for The Boys Season 2.

Reddit user EndlessMorfeus suggests Stormfront was actually born at some point in the 1940s, right around the time that Frederick Vought (a Nazi scientist and founder of Vought Enterprises), arrived in the U.S. The theorist backs Stormfront’s Nazi German origins by pointing out her references to wearing a Pippi Longstocking Halloween costume.

Pippi Longstocking was originally created in 1945 and probably wouldn’t have been a likely Halloween costume choice for someone born in the last forty years. Stormfront was a also Nazi in the comics, with powers that allowed him to age slowly, making it possible for the character to still look young in The Boys.

It’s possible that Stormfront was one of the first supes (a term used on the show to reference superpowered beings) to be injected with Vought’s Compound V, a manufactured substance that gives them their powers. After all, Stan Edgar made it clear that Frederick conducted human experiments under the Nazi regime before leaving for the U.S. (likely to avoid prison). The information all but confirms Vought’s intentions for Compound V. The company’s push to make the Seven a part of the military implies that their intentions are to build a superpowered army, perhaps with Stormfront as the new leader.

In the third episode of Season 2, Stormfront pretty much confirmed that she was racist, which is a cornerstone of Nazism. Ahead of killing Kimiko’s brother Kenji, she called him a racial slur and when trying to catch him ends up killing every person of color throughout the apartment building. In the trailer for The Boys, she was also seen speaking to a crowd about how the super terrorists will come.

The Inverse Analysis — Clearly, Stormfront's ideologies are in line with that of a Nazi, especially considering the comic book origin of Stormfront. The notion that she may have a slow aging process certainly makes this theory plausible. However, The Boys showrunner Eric Kripke has been adamant that Stormfront is peddling nationalism and white supremacist ideology for a modern audience, spread through her use of social media and television. After all, her being a racist with Nazi ideologies isn’t necessarily limited to the 1940s and is very much in play in our own present day. Whatever the case may be, Stormfront’s arrival spells trouble.